Around the world, Book Lovers’ Day will be an opportunity for bibliophiles everywhere to rejoice! However, we should spare a thought for the worrying number of children who don’t have access to the most basic levels of education, enabling them to participate.

The United Nations also holds an annual celebration of reading known as World Book and Copyright Day on the 23 April, as well as the International Board on Books for Young People (IBBY) who host International Children’s Book Day every 2 April.

With so many annual international events celebrating authors, publishers and readers, this really puts into perspective how essential it is to achieve full literacy around the world.

However, despite working towards Sustainable Development Goal 4 (specifically 4.6: achieve literacy and numeracy), a recent UNESCO report on global literacy predicted 30% of adults and 20% of young adults will still be illiterate in low and middle-income countries in the year 2030. We are on track to fail.

Digging in to the statistics, we can see geographic and gender disparities in levels of literacy. According to a BBC investigatory report in 2017, in Liberia alone, almost two-thirds of primary-age female pupils are not in education at all. 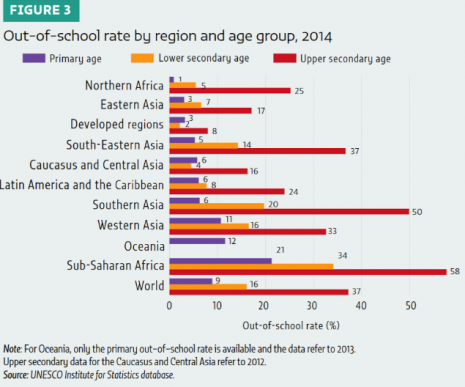 Across the globe, sub-Saharan Africa has the highest education exclusion rate of any region. A report from the UNESCO Institute for Statistics tells us that, not only are 21% of primary school age pupils incapable of accessing education, 23% of girls are denied education, in comparison to ‘only’ 19% of boys.

It’s Time To Talk About Illiteracy

If you’re reading this, you’re one of the 86% of people on the planet who are literate. The remaining 14% are illiterate, and in real terms this equals over one billion people. Literacy rates worldwide range from 100% in Cuba to 22% in Chad. Universally, we need to recognise and celebrate the progress being made, and where rates remain stubborn or are even going backwards (as in Syria) we need to prioritise the solution — education.

Innovative responses abound, such as in Liberia where the Learning Links programme connects literate Liberian women with illiterate Liberian girls; a country where one-in-three girls will leave school due to pregnancy and only one-in-five women are literate. Learning Links trains literate women as tutors to illiterate out-of-school girls. One measure of success is the number of girls who return to school.

Literacy is a foundational pillar of basic education and as such, it’s something that we place a lot of emphasise on in instructional design. It’s only when children have grasped core skills such a literacy that they can hope to progress in other subjects. In a recent DFID study 80% of Bridge pupils performed above the sample average in literacy. This compares to 62% of pupils at low-cost private schools and 18% at public schools. In Kenya, an average of 30% and 31% of Bridge pupils passed the Early Grade Reading Assessment (EGRA), an examination which tests pupils’ reading fluency as well as comprehension.  This is in comparison to 16% and 24% of pupils in neighbouring schools.

Not all children are so lucky. This Book Lovers’ Day, spare a thought for those who can’t read and the challenges that they face through life as a direct consequence of not being literate.

How important is literacy to education and development?

Literacy is so fundamental to learning that its importance cannot be overstated — it is the essential foundation of education. [...]

A Love of Books Leads to Literacy and Learning

Reading is fundamental to opportunity, prosperity and even better health; it’s an education bedrock. Yet, around the world, most children [...]

Read Reading to learn, after learning to read

Read The trend of evidence shows the Bridge effect is real