Bridge partners with the British Army Parachute Regiment in Kenya

Bridge Academy, Likii in Laikipia county, Kenya was proud to welcome the team from Kenyan British Army Training Unit (BATUK) as part of their community engagement program seeking to build partnerships across the country.

The British Army works closely with the Kenyan Government and up to six infantry battalions carry out eight-week exercises each year. Their permanent training support unit, BATUK, is based mainly in Nanyuki, 200 km north of Nairobi, where Bridge runs several high performing schools. The community project came shortly after the school celebrated the release of the Kenyan national primary exam results. For the third consecutive year, Bridge pupils across Kenya significantly outperformed the nationwide average. At Bridge Likii, Stacy Kerubo and Stephanie Adhiambo scored an impressive 366 and 330 marks respectively – well in excess of the Government’s 250 pass mark. 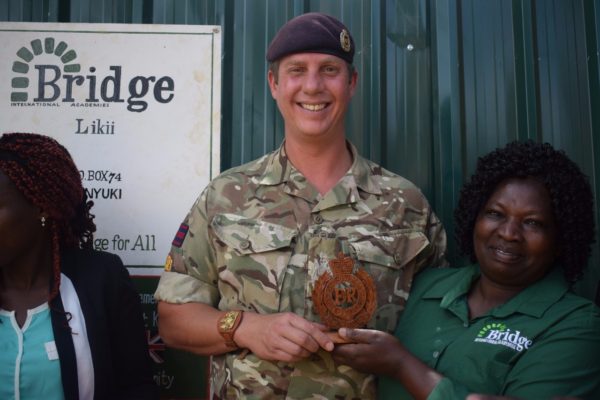 In Likii, the 3rd Battalion Parachute Regiment, which was deployed to train with the Kenya Defence Forces (KDF), spent time with the Bridge community at the end of term helping with school renovations. The regiment generously provided a 5,000-litre water tank and expanded the infrastructure; while the school has a water supply it had previously faced a challenge of water storage. In addition, the soldiers constructed a fence to the front and western side of the school; redecorated outside areas and helped reinforce the pathway running alongside the main school building with stone.

Commenting on the initiative the Commanding Officer of 3rd Battalion The Parachute Regiment, Lieutenant Colonel Geoff Hargreaves, said: “It was an honour to be welcomed by the local community that is so vital for our training with the Kenyan military and an honour to be associated with such a wonderful project.”

Moleen Ute, Regional School Leader for Bridge, said: “We are very grateful to BATUK for their continued support for the community in Nanyuki, especially their partnership with Bridge Academy, Likii. Our pupils enjoyed making new friends and practising speaking English with the British soldiers.” 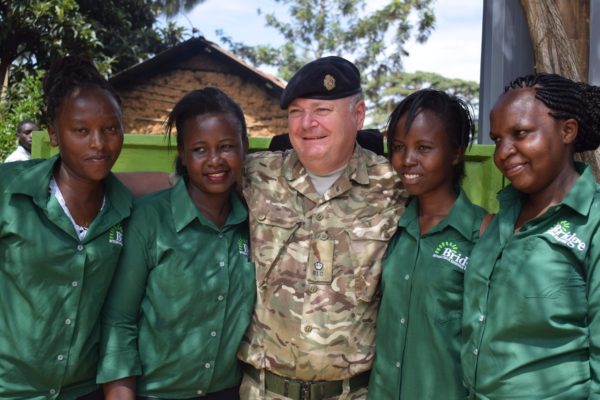 The British Army and Kenyan Defence Forces (KDF) train together during the battle group exercise at Archers Post training area in Samburu County, learning from each other and strengthening the partnership between both armies.

Bridge has a reputation of working in conflict areas across Africa, from northern Uganda, Borno State in Nigeria, and areas where Al-Shabaab operates in eastern Kenya. Bridge believes that education is essential for peace and prosperity, arguing that education reduces conflict, enhances stability and strengthens nations. For those affected by conflict, education is the ultimate empowerment for children and their families and Bridge is proud of the work it does in areas affected by conflict.

To read more about the work that Bridge does for internally displaced people (IDP) communities in conflict areas, please see our pilot project with Syrian refugees in Lebanon.

Proud to be a UN Global Compact Participant