The 2017 Kenyan Primary National Exams results have been published and thousands of Bridge pupils have performed exceptionally well for the third year in a row.

Across the country from Kilifi to Isiolo, Kitui to Garissa, Mombasa to Busia, Bridge pupils are celebrating their success and making plans for the future. For thousands of Bridge pupils, passing the national exam means that a place at secondary school is within their reach.

Children from communities such Koru in Kisumu County and Kwa Holla in Mombasa County are in the top 1% of pupils nationally.

The results prove once again that all children need is access to a school where they can learn and an opportunity to succeed. Supported and empowered teachers and a strong education give pupils the confidence that they need to follow their dreams.

No matter the community they come from, their education means that they can go on to be tomorrow’s doctors, engineers, lawyers and leaders of Kenya. 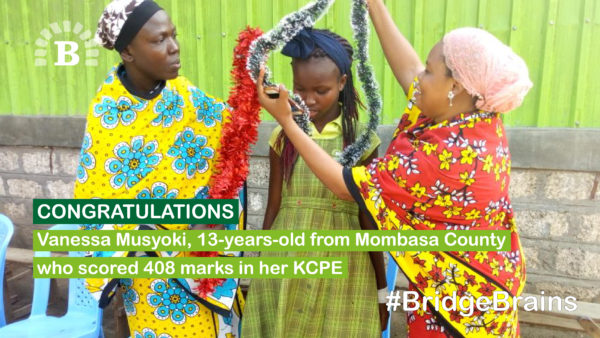 Vanessa Musyoki is 13-years-old from Bridge Academy, Kwa Holla in Mombasa County. Vanessa says she feels like she has become a good leader since joining Bridge five years ago, where she is now a class prefect and has joined the Scouts Club.

In her 2017 KCPE exam, Vanessa scored an incredible 408 marks. She’s one step closer to achieving her dream of being an actress, she says she wants “to be a role model, displaying the right behaviour to a big audience. I also want to write novels, I am inspired by Chinua Achebe who writes well about African culture.”

Her favourite subject at school is religious education because it helps her faith to grow and supports her to overcome her daily problems. She adds, “I like Bridge because they have a variety of books, which really help us to enhance our reading skills.”

When asked what a difference Bridge has made to her life, Vanessa says: “I want girls in my community to see the benefits of a good education.” 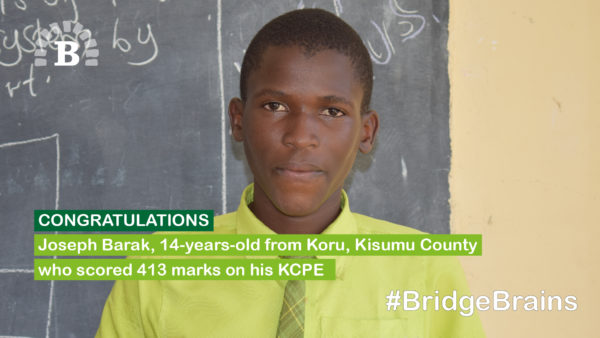 Joseph Barak is 14-years-old from Koru, Kisumu County — the son of a small-scale farmer and a house helper.  Joseph had to trek for 5 kilometres through sugar plantations every day in order to reach a school where he could actually learn. He says he joined Bridge because “Bridge teachers teach well.” His favourite subject is social studies which has helped him to understand history and current affairs.

In his 2017 KCPE exam, Joseph scored an incredible 413 marks out of a possible 500, which takes him one step closer to achieving his dream of becoming a lawyer.

When asked what a difference Bridge has made to his life, he said: “Today, I speak fluent English because I have an education. This was only a dream before I started at Bridge. I am also very confident that I can interact with other people and be understood. I have learnt to appreciate diversity through my education.”

Joseph’s success as the first born in a family of five means that he is now a role model to his younger siblings. “Thanks to God, his future looks bright,” said his father.

These are just two of the voices from communities in Kenya. There are thousands more.