Sometimes a child from a humble family goes on to become a star.

Franklin Adedeji, the unassuming eleven-year-old boy from a family of five now attends a top secondary school in Lagos as a beneficiary of a prestigious scholarship after performing exceptionally well in the country’s national common entrance exam.

Franklin’s primary school, Bridge International Academies, is part of a network of nursery and primary schools that serve low-income communities.

Franklin’s father is a businessman while his mother runs a shop where she sells fabrics. They have always been very serious about the education of their children, making it a priority for the family.

Franklin’s academic journey has been described as a fairytale story. During a chat with his parents, Mr and Mrs Adedeji said that Franklin’s success story began four years ago when he requested to leave his previous primary school. His reason was that he was not challenged enough in class and so didn’t always do as well as he could. His mother recounted an incident that happened years ago, when Franklin was ill and couldn’t go to school as a result of the chicken pox he had, to the extent that he missed the termly exams. His teacher told his mum that if he missed writing his exams, he was confident that Franklin could still come out top in the class. “So Franklin always had the potential but he needed a school with supportive teachers and competitive pupils to encourage and push him to strive and aim for the best,” Mrs Adedeji said. 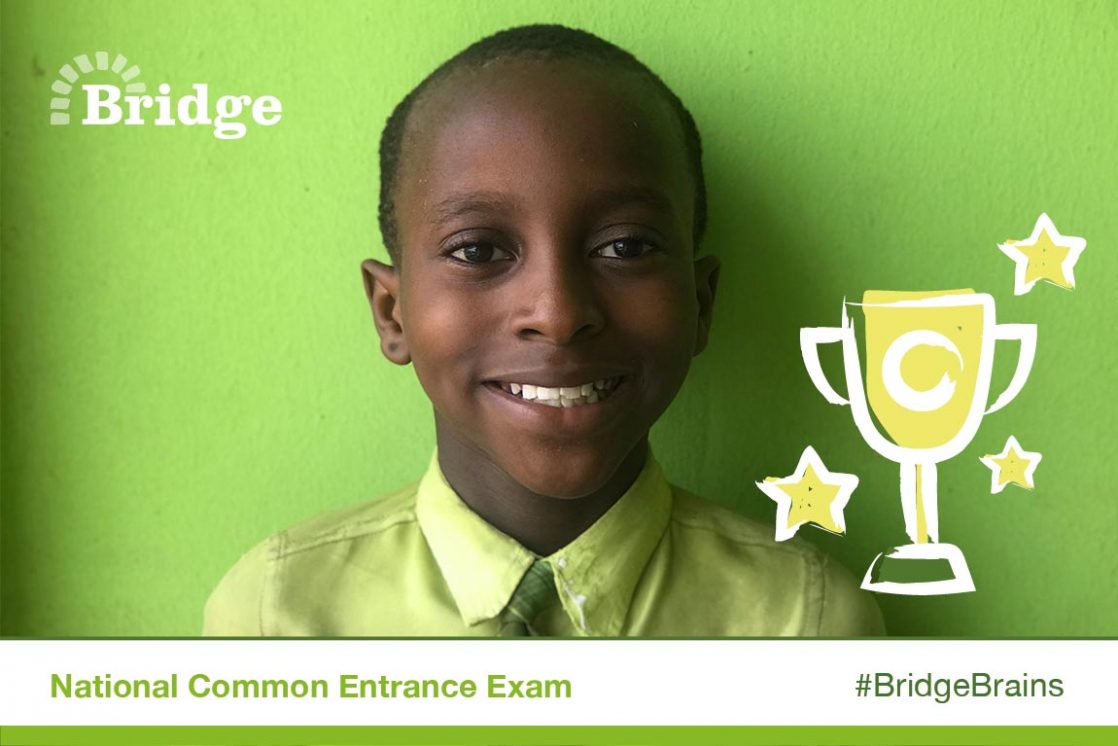 Franklin moved to a Bridge school in Ikorodu four years ago and hasn’t looked back since. “Each day we learnt new things,” Franklin noted, saying that Mr Azeez Fasasi was his favourite teacher and was always willing to help him. Mr Fasasi spotted the potential in Franklin and helped him overcome his shortcomings. He worked on Franklin’s confidence as he discovered Franklin was timid and was hesitant in expressing himself in public.

When asked what his favourite subject is, Franklin had an unusual answer for an eleven year old, “Maths” he said, “because it makes me think faster.” This skill will certainly come in handy for Franklin’s dream job, which is to be a scientist in order to “help Nigeria improve,” he explained.

While at Bridge, Franklin was the Head Boy and had the duty of teaching others to behave well, he helped the teacher with collecting books and keeping the classroom in order. He learnt how to be responsible and care for others. Franklin also loves reading and volunteers to read story books aloud to his class.

Franklin Adedeji was the best graduating pupil in 2019 at Bridge Nigeria, having scored an amazing 182 marks out of 200 in the National Common Entrance Examination.  As a result of his fantastic score, he got a chance to compete against other top performers from across the country for the Nigerian National Production Corporation and Shell Nigeria Exploration and Production Company (NNPC/SNEPCo) National Cradle-to-Career Scholarship. Scholarships like this are important for pupils like Franklin, as it enables academically brilliant children from less privileged backgrounds be able to attend strong secondary schools in Nigeria. Franklin was shortlisted for his state of origin, Ondo State, and over 100 pupils competed for the prized secondary school scholarship. He was amazed to win one of the three places; ‘these things don’t often happen to children in communities like mine’ he says.

According to Shell Nigeria, scholarships like Franklin’s are “Designed to bridge educational inequalities resulting from geographic and socio-economic difference.” They select candidates from each of the 36 states and the Federal Capital Territory to enter, finally awarding scholarships to the three best children.

Now, Franklin attends Lead-Forte Gate College, Lekki, a top independent secondary school established with a vision to produce world class leaders. The students of the school have participated in local and international competitions, recording impressive academic performance with at least 95% of students passing their end of secondary school exams. Despite his amazing marks, Franklin is only able to attend this top school because of the scholarship he won through the competition; otherwise it would be outside the pockets of his family.

Franklin’s fairytale story cannot be complete without highlighting the role that his Bridge primary school played in his academic success. Bridge uses an approach that leverages technology to leapfrog education, enabling teachers to succeed and children to excel. A UK Government report at the end of last year showed that unusually Bridge was delivering equity of learning at its schools in Lagos, for all children, regardless of their background, and the common entrance results support that.

The Academics Director at Bridge Nigeria, Rhoda Odigboh said “Our teachers must take some credit for the success of their pupils. It’s dedication, passion and hard work of teachers who enable us to transform the opportunities for children each and every day across Nigeria.”

“The success our children have achieved in the national exam shows what Bridge has always believed, that every Nigerian child can excel if they are given the right opportunities, supportive teachers and empowering schools.”

Bridge International Academies first entered Nigeria in 2015, supporting community schools across Lagos. 2019 was the first year that the school network entered pupils for the National Common Entrance exam. Fifty five Bridge candidates sat the exam in their inaugural year and boys and girls excelled equally with Bridge’s top performing female pupil, Fatimat   Ibrahim scoring 179 marks. The majority of Bridge candidates did very well and surpassed the historical unity cut off exam score for Lagos state; the state that usually has the highest cut off score in the country. The majority of pupils scored 132 marks or more out of 200 which is impressive, especially considering that Bridge is focused on serving low-income families.

The results provide further evidence that Bridge provides a strong education to children in Nigeria and builds upon the preponderance of evidence being gathered by the school network in national exams such as the Uganda Primary Leaving Examinations (PLE) and the Kenyan Certificate of Primary Education (KCPE); in both sets of government exams, Bridge pupils outperform the national average every year.

Back in Nigeria, from his humble background, Franklin now learns alongside children from some of the wealthiest communities in Lagos. His success is largely down to the support from his teachers and parents and the solid Bridge primary foundation he received from which he can explore and conquer the world.

Franklin describes going to Bridge as a “life changer,” and says that he would recommend it all families.

Bridge International Academies has community nursery and primary schools across Lagos state and Osun state, and works in partnership with the Borno and Edo governments to improve government primary schools. It has ambitions to support all Nigerian children to do as well as Franklin.

This blog is taken from an original article in Vanguard, ‘The Inspiring Story of the Brilliant Student on the Path of Greatness,’ December 14, 2019.

Read Building success, skills and confidence in our pupils