Despite the abundance of rhetoric and resources aimed at eradicating gender inequality, norms are slow to change.

In Kenya, for example, contrary to the law, 23% of girls are married before they turn 18, which cuts short their formal schooling. Studies find that misperceptions about menstruation result in girls in Uganda missing up to 8 days of school a term due to their period. Systemic gender disparity is worsened by extremist violence. In northeast Nigeria Boko Haram actively targets girls seeking a formal education, most famously in the Chibok kidnapping tragedy. Al-Shabaab, a terrorist organization known to force abducted teenage girls to marry their fighters, terrorizes schools in Northeast Kenya. 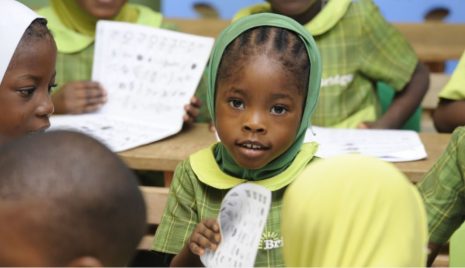 All these factors combine to make education unequal at best and unobtainable at worst for girls across most of Africa.

To use Kenya as an example of the impact, 16% of women in Kenya still lack basic literacy skills, compared to 9% of men. In Uganda, youth literacy is 90% for boys, but only 86% for girls. And while enrollment in primary education has increased, UNESCO data shows that girls are less likely to finish through secondary school. In 2017, only 40% of candidates that met minimum university entrance qualification in Kenya were female. Unequal access to education is exacerbated by fewer female role models in schools and generally higher investments in boys’ education.

According to the newest UN data for 2018, the gender parity at primary school level has been getting worse since about 2011. The latest UN data also reveals that the number of girls out of primary school is increasing globally.

Bridge is committed to fostering gender equality. In this effort, Bridge takes a multifaceted, research-based approach to improve educational outcomes for girls. Literature has shown the impact of motivation on achievement, so Bridge provides scholarships to top performing female pupils. Teachers are trained to ensure they call on both boys and girls in the classroom. Girls are encouraged to take on leadership roles, excel academically, and engage in co-curriculars like chess, the arts, taekwondo, and computer programming.

Research has shown the powerful impact of female role models in educational attainment; a 2007 J-PAL study found that the presence of female leaders in a village was able to eliminate the gender education gap. Bridge believes that through empowering women we can empower girls. So, each Bridge academy in Kenya has a women’s representative, elected by the community, and two “super mamas”, who together work on women empowerment programs. Through Bridge’s annual Women Leaders Conference, these leaders are equipped to support women in starting new businesses, create forums around important issues, and act as leaders.

There is also compelling evidence of gender parity in Bridge schools in Uganda, most recently in the 2017 Primary Leavers Exam, or PLE. Girls at Bridge excelled, challenging the prevailing gender performance gap; they were almost 2.5 times more likely to achieve Division 1 or Division 2 (top scores) than their Eastern Ugandan peers. Following historical trends, boys outperformed girls on the PLE nationally. 60% of boys were placed in Division 1 or Division 2 while only 52% of girls achieved this status. At Bridge,  boys and girls are performing on par, with over 90% of both groups achieving Division 1 or Division 2. 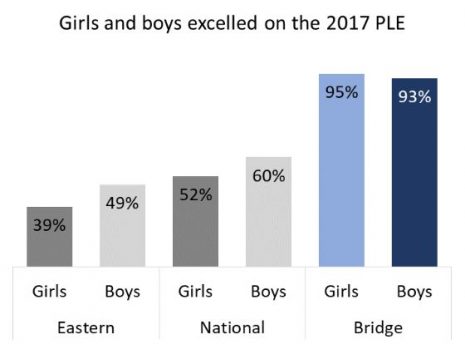 In both Uganda and Kenya, Bridge girls will sit the national exams again in 2018 and we anticipate that their success will be replicated.

By providing equal opportunities to boys and girls during and after primary school, Bridge actively challenges cultural norms and ideologies that obstruct women’s access to formal education. Bridge is guided by the principle that all children should have access to high-quality education. Natasha Wanjiru, class of 2015, sums it up neatly. “Bridge has equipped me with something nobody can ever take from me- an education and a chance to realize that I can help other girls achieve their dreams too.”

We believe an educated girl is powerful. Super powerful.

More women in the boardroom? Start with more girls in the classroom