In Uganda, Pupils sit the Primary Leaving Exam (PLE) when they finish primary school. All pupils have to take this exam and they need to pass to be able to continue their education at secondary school.

The exam is divided into five Divisions from 1 – U; Division 1 is the best. The Division a child is placed in is determined by the number of aggregate they get across 4 subjects; the lower a child’s aggregate the better their score and division.

The  independent government exam enables our pupils to be compared with those in neighbouring schools and in schools across Uganda. For two consecutive years now (2017-18) our pupils have outperformed the national average: 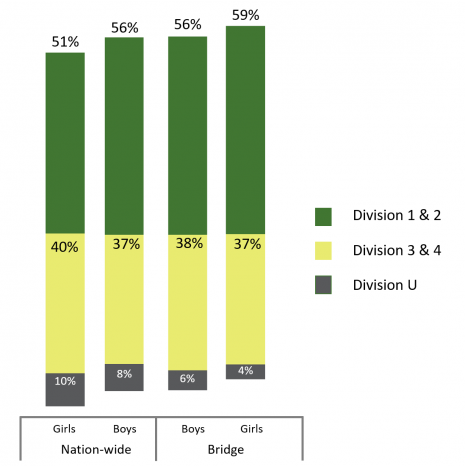 In 2017, Bridge pupils sat the PLE for the first time and outperformed the national average – with over 93% passing in Division 1 & 2. Even more striking, was that these pupils come from impoverished eastern Uganda, where candidates have historically underperformed on their PLE. In 2017, while a respectable 87% of pupils in eastern Uganda passed the PLE, only 44% were placed in the top 2 Divisions. Bridge pupils were twice as likely as their peers within their region and achieve top scores.

Our results are consistent with other learning gains evidenced at Bridge, such as those in Kenya, Nigeria and Liberia. The results released by the Uganda National Examinations Board are a rubber stamp on the exceptional performance of Bridge pupils.

Learn more about our work in Uganda

Read about our Learning gains in Kenya

Read about our Learning in Liberia: Year One

Read The strong trend of accelerated learning in Kenya