A new study released today shows that students in Bridge run Partnership Schools for Liberia (PSL) public schools learn twice as fast as their peers in traditional public schools, receiving the equivalent of a full year of additional schooling.

The year long study was designed to measure whether a radical new approach to delivering Liberian primary education could improve learning for students in a country decimated by Ebola and civil war. The answer has been a conclusive yes.

The report ranked Bridge student performance best among all eight PSL partners. It also found that students were learning more, teachers were less likely to be absent and families were happier. 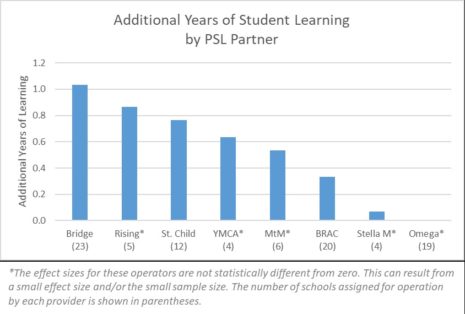 In Liberia, only 38% of children attend elementary education and 46% of young people are illiterate. After one school year, the 93 public schools in the PSL program had increased student learning by 60%. Bridge run PSL public schools had doubled the learning. 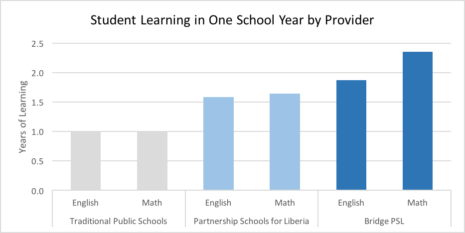 Key findings from the report reveal:

These results are even more impressive given operators had less than 2 months to visit their schools, engage the community and teachers, conduct teacher training, and set up their management systems. Furthermore, according to the World Bank, there are only 16 countries in the world where it is harder to set up an organisation than Liberia.

Commenting on the report, Marcus Wleh, Head of Bridge PSL in Monrovia, said, “These learning gains are outstanding and offer real hope and opportunity for the thousands of Liberian children who will be joining PSL this year. We are proud that our students have significantly outperformed their peers in ‘traditional’ public schools. We want to congratulate every single teacher and pupil in all 25 Bridge run PSL public schools for their hard work. These extraordinary results are due to the bold vision of the Liberian Ministry of Education, the hard work of pupils and teachers, and Bridge’s innovative model.”

The report authors at Center for Global Development, said, “There is solid evidence of positive effects for Liberian children during the first year of PSL. Students at PSL schools learned more, received more instruction, and were happier at school than students at traditional public schools. Teachers in PSL schools were more likely to be at school, on-task, and engaged in instruction.”

Dr Shannon May, co-founder of Bridge, said, “The world was watching to see whether Liberia’s education system could be transformed, and the answer is yes. Liberia’s innovative PSL public school program has been validated. I’m delighted that the Government has decided to expand the programme to the southeast and build on this success. The report proves that teacher accountability, improved operating capacity, a full day of learning for pupils, and class sizes conducive to learning, produce great results. The success of this program gives a generation of children hope and Liberia itself a brighter future.”

Further findings from the report about PSL as a whole, which includes 8 government partners:

Interviews are available with:

Bridge is one of eight partners who are helping the Liberian government to explore how independent organisations can help the government to reform the Liberian education system and meet the urgent need for quality schools and nurseries. The policies governing the PSL programme are designed by the Liberian Ministry of Education, and the eight independent operators are implementing a government curriculum in all the schools.

27,000 children have benefited from year one of PSL as a whole, of this 8,999 are students at Bridge run PSL public schools. In 2017/18 approximately 70,000 children are forecast to benefit from the PSL program in total.

More information about PSL is available on the Liberian Ministry of Education website.

Bridge believes every child has the right to high quality education and works in partnership with governments, communities, parents and teachers to ensure access to quality education. Bridge has served over 250,000 children to date.

Globally, there is an education crisis. 600 million children are either not in school at all, or in school and not learning. Bridge is committed to helping tackle this through a data driven, evidence based approach that delivers strong schools and a great education for all.