UNESCO’s Vice Chair of the Education Commission and Head of Education Delivery at the Ministry of Education in Liberia, Gbovadeh Gbilia, has released Learning in Liberia a co-authored study assessing the learning progress made in Bridge supported schools as part of the Liberian Education Advancement Programme (LEAP).

The study finds that 81% of students who joined a Bridge supported LEAP school in the first grade and have now spent 2½ years in a Bridge classroom are proficient or basic readers; compared to only 33% of students in traditional public schools.

The government’s ambition is for all Liberian children to be proficient readers by the time they finish their primary school education. Significantly, the new study reveals that 53% of grade three students in a Bridge supported school have now achieved proficiency. A dramatic difference from the prevailing situation in non LEAP schools where only 8% of children in this grade reach reading proficiency.

LEAP is a bold initiative developed by the Government of Liberia four years ago to increase the quality of pre-primary and primary education across the country. Uniquely, it has thrived under two different administrations having being implemented as Partnership Schools for Liberia under President Sirleaf and continued as LEAP under the leadership of President Weah. Strong political leadership and clear focus on improving schools for Liberia’s children trumped the struggles signature policies often face with regime change.

In 2016, 62% of primary school aged children were not enrolled in Liberia. Thirty-five per cent of women and 21% of men could not read a single sentence. LEAP had a singular goal, to improve learning outcomes for Liberian children. The Ministry of Education commissioned several studies including an independent randomised control trial (RCT) to ensure that progress against the government’s vision was objectively measured to form the basis of government policy decisions.

In the first year of LEAP, Bridge supported 25 schools; in its second the Ministry allocated the social enterprise a further 43 schools with many in the remote south-east of the country. The programme was led and designed by the government—teachers remained public employees on the government payroll—school buildings were owned by the Ministry and the national curriculum was strictly adhered to.

Now, a collaborative study looking at the three year programme has been released. It focuses on Bridge—the largest of the LEAP partners—and indicates that the programme has significantly improved learning outcomes as the Ministry of Education intended: 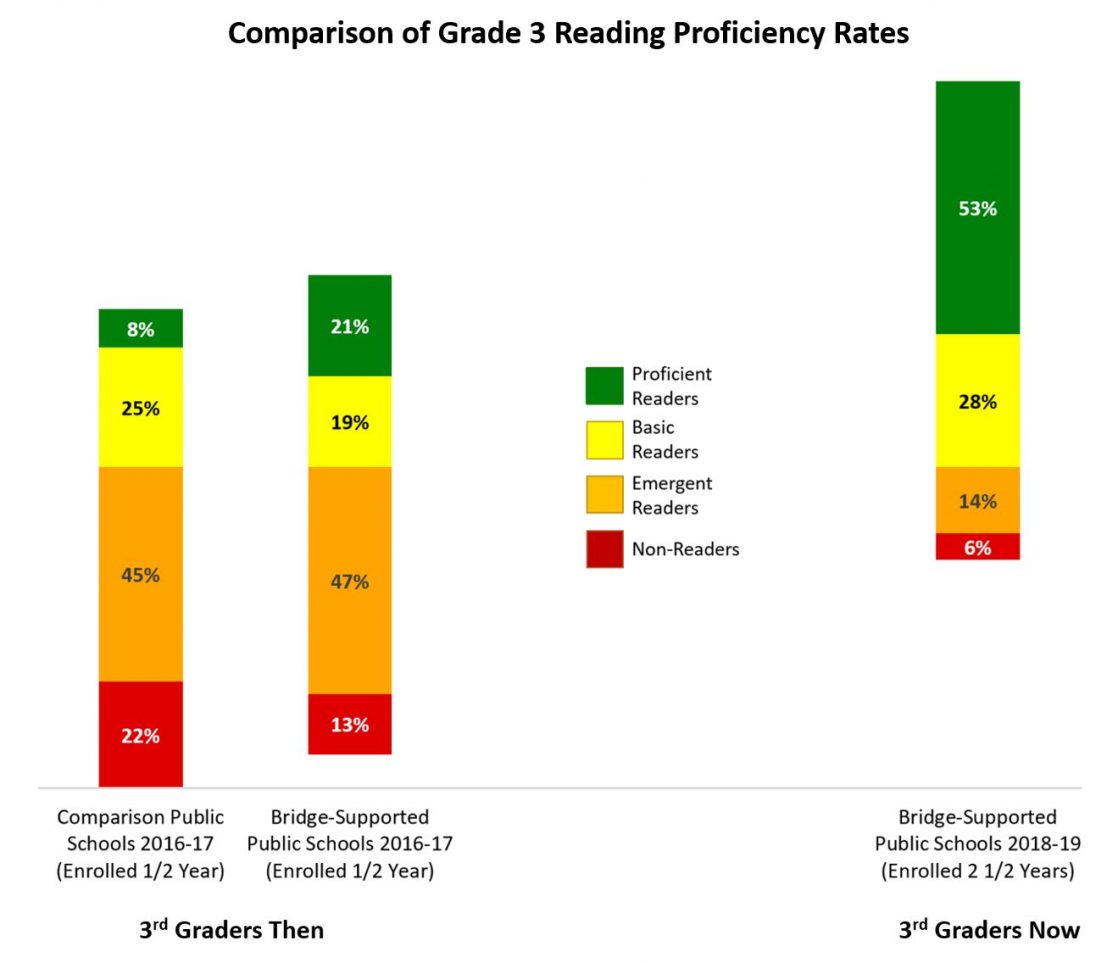 In addition, the impact on girls’ education is particularly noteworthy in a country where previously only 39% of girls completed primary school. Results across almost all grades show a reduction in the gender gap that Bridge-supported LEAP schools inherited in its opening year. In literacy, most performance gaps have been completely eliminated. In the past 2½ years, 5th grade girls’ average performance on passage reading fluency increased by over 27 words per minute. Once lagging by 10 words per minute, girls now outperform boys.

Equipped with evidence, and confidence of the learning gains being achieved by its children, the government has now expanded the LEAP programme into its fourth year to reach 225 primary schools across the country. Its ultimate vision of transforming learning for all 2,619 of its public primary schools is within reach. By putting education at the heart of its public sector transformation agenda—the Liberian government has proven that poverty is not destiny.

Discover more about our Impact in Liberia

Learn more about how we train and support Government teachers