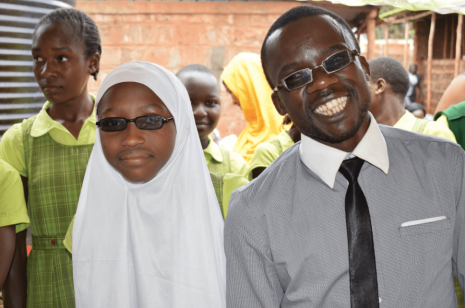 Clara’s mother began teaching at her academy and enrolled her daughter after seeing what incredible progress children were making in class.

Clara’s now been with Bridge for two years and made steady progress; she’s always top of her class. Some say she might even be Bridge’s brightest pupil in Kenya! This year is an important year for Clara because she’ll sit her primary school leaving exam (the ‘KCPE’), which will determine whether she can continue her education and go to secondary school. Like all children she is nervous about her exams and is working extremely hard to make sure that she does her best.

She doesn’t need to worry; she is well prepared. In her recent end of term tests, she scored a truly remarkable 430 marks! The maximum mark in Kenya is 500 and if she can score above 400 in her KCPE, she’ll be amongst the top 1% nationwide; which includes everyone from elite private schools to public schools.

She credits her success to the support she’s received from her favourite teacher, Mr David Okombo Jauyoma (above, right), who spends his time ensuring each and every pupil understands his lessons fully. A determined girl, she says: “Education has taught me so much that I didn’t know before. For example, about other people, cultures and the need for respect and understanding.”

Clara doesn’t believe, like some in her community, that science isn’t for girls. She loves to solve number puzzles and excels at both maths and science. With hard work, she dreams of going to the University of Oxford, to study medicine and become a doctor. “There are so many sick people in my community, I want to help those people,” she says.

It’s not just in the classroom that Clara refuses to adhere to gender stereotypes. When she’s not studying hard, she enjoys playing football with her friends. Her success and commitment to learning are an inspiration to her fellow pupils and her community.

Find out more about our work in Kenya

Find out about Learning gains in Kenya