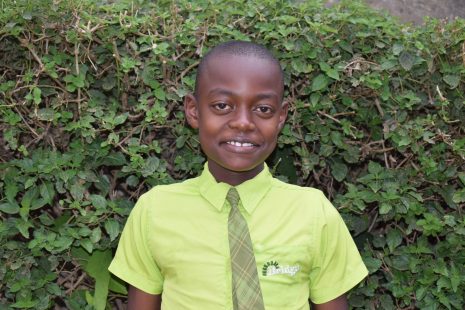 Fourteen-year-old Cornelius goes to Bridge, Serem in the Vihiga County of western Kenya. He’s been at Bridge for four years, and says his reason for joining was: “Pupils were performing very well, my cousin encouraged me to join.”

Cornelius comes from Kaboreng village in neighbouring Nandi County, where most of the people are from the tribes Nandi and Luhya. Many people are farmers, they grow maize and tea while others have businesses. He says: “There are big challenges in my community, many of the men don’t work” However, he’s happy that more children now go to school, but most public schools are overpopulated, making learning difficult.

At home, he lives with his mother who’s a farmer, and his father—a soldier—is stationed at a barracks 200 kilometres away. At school, he’s a Class Prefect and loves it because he gets to help his teachers and hone his leadership skills.

Bridge has given me the confidence I need

He concludes: “I want to join Moi Forces Academy because it’s the best! It will make be the best engineer.”