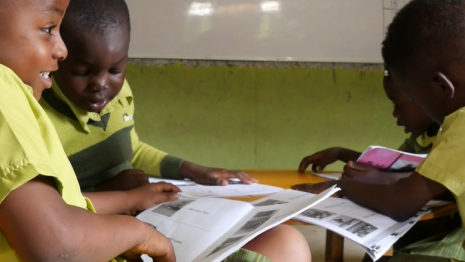 David (above left) is a six-year-old Bridge pupil from Lagos, Nigeria. We meet David as he has just finished reading in front of the class. A bright smile lights up his face as he is given a resounding ‘Super Cheer’ for reading well—he loves reading and is improving every day.

Prior to attending Bridge, David could barely form sentences or read a simple word. David’s mother, Mrs. Stella was initially planning to enrol her son into Class 1, but his literacy and numeracy levels were well below Class 1. The Bridge academy manager offered Mrs. Stella to register her son to a Nursery Class 2, which would give him the chance to catch up with his peers. David did really well and was able to go into Class 1 the following year.

David hasn’t looked back since, soaring to the top of his class. He’s eagerly learning vocabulary and reading as many stories as he can each week, and is now able to fluently talk with his classmates, teachers and parents. Besides his strong academic performance, he’s also very social and actively participates in co-curricular activities. His favourite things to do are chess and football; his teacher says David is by far the most social kid in his class.

Mrs. Stella says she’s extremely happy with David’s progress: “I’m so proud of him, he has improved a lot since joining Bridge. Now he can read entire stories on his own. If I type anything on my phone and David is standing behind me, he can read it.”