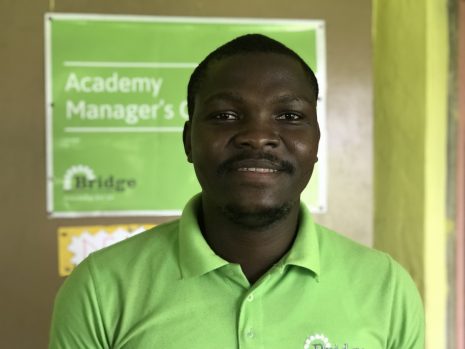 Meet Emmanuel Aderinkomi. He’s been working at Bridge for three years. He started off as an academy manager at Bridge, Ebenezzer Oyedele before being promoted to the role of area manager 18 months ago.

“When you are an academy manager you are everything to parents, pupils and their community,” Emmanuel explains, “You are a father to them all—any issues and it’s up to you to try and resolve them. Each day at the academy, you’re the first person to arrive and the last person to leave.” He promises: “Even when school is closed you’ll find me in the academy!”

Emmanuel says that he was promoted to the role of area manager because Bridge recognised his hard work in his own academy. “My academy was very quiet and clean,” he says proudly, “The teachers were all doing the right thing and there was unity in my team—I felt ready for the next step.”

However, the change to area manager came as a shock at first and Emmanuel initially thought he wouldn’t be able to cope. He explains, “as an academy manager you can easily see the reward and you know when it’s running smoothly.” Contrastingly, Emmanuel professes to having felt scared about becoming an area manager, because he would now be responsible for 15 academies!

Nonetheless, Emmanuel took it all in his stride and explained that he knew the task would be doable thanks to the support of his regional management. Now he’s really enjoying the role! “I am am the point of contact between all academies managers and schools management,” he says, “We are the custodians of the information about what goes on in the academies. We make sure the managers do not feel alone and that they have someone to trust. We’re there to help out.”

Emmanuel is immensely proud of the work he’s done with Bridge, saying: “We make a lot of difference in our communities.” Beyond the classroom, he sees his smartly dressed and confident pupils as an inspiration to other people in the community, and concludes: “Bridge is force to be reckoned with!”