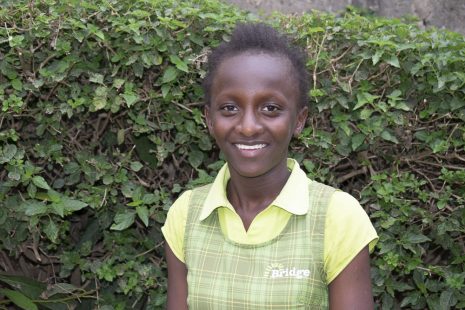 Jackline Maragi is 13-years-old from Isiolo County. Her village is home to many refugees who’ve fled conflict in neighbouring Somalia; this means many people live in poverty. Most of them are fleeing violence. Jackline says: “It’s not safe to walk around at night, boys are captured and forced to join al-Shabaab.”

This insecurity also considerably effects education: “A few weeks ago there was so much violence we could not go to school. They had to shut it until al-Shabaab left our village,” says Jackline. These issues can particularly affect girls in her village. She adds: “Some do not want us girls to move forward, they say I am supposed to be married and not in school. Some are forced to do this—they leave school and have babies.”

Typically, in her village people farm for work growing crops such as sugar cane and mangos. At home her mother sells fish and her father is a Pastor. Jackline has has one brother in Baby Class and one sister in Class 5—she’ll always help them with their homework.

Every morning she leaves the house at 6:45 am – she must wait until this time, because the sun is up and it’s safer for her. In school she keeps busy participating in both the debate club and scouts.

When she’s older she wants to be a journalist—she says: “I want to tell people all around the world and Kenya the truth of events to help promote peace.”