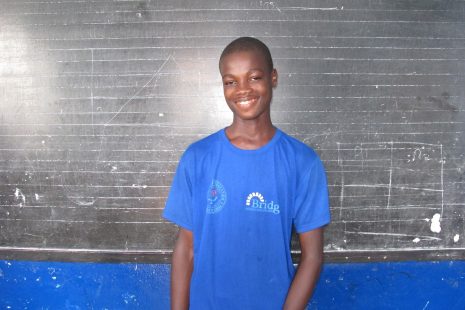 Meet 14-year-old Justin. He’s one of five, with two brothers and two sisters. His mother sells ice cream, while his father is a mechanic. Justin looks up to his parents who he says are, “both very hard working.”

Justin is in the 5th grade at Bridge Liberia school in Monrovia, which he has been attending for two years. He much prefers it to his last school because he gets to learn more about computers. They can’t compete with his real passion though, which is science. “I’m interested in animals, the reproductive system, and how organs work!” Justin explains.

Justin’s hoping to turn this interest into a career and study to become a doctor when he finishes school. “I want to help people—to make them healthy,” he exclaims. Thankfully he has a great teacher, who will no doubt help him to achieve the good grades he’ll need. He [favourite teacher] is, “kind and very good at instruction,” reports Justin.

With a great work ethic and a real enthusiasm for science, there’s no doubt that Justin will one day make a great doctor. Good luck!