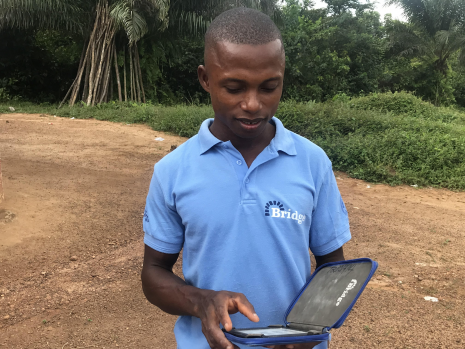 Meet Kenneth G Wallace, the much-loved Nikpachilu Principal who always ensures that he puts the well-being of pupils first!

A way in which Wallace prioritises pupils is through requiring the school’s teachers to sleep in the school grounds during the school week, giving them plenty of time to prepare fun-filled lessons for their eager-to-learn pupils.

Wallace, who has been Principal at the school since the LEAP programme began, sees the arrival of the school’s pupils as a ‘wonderful opportunity’ to inspire the minds of Liberia’s future in an engaging way that keeps both teachers and pupils gleaming with joy!

Wallace believes that the LEAP Programme has helped to make teaching fun, rewarding as well as challenging for pupils. As part of the programme, pupils have been introduced to previously unseen technology which often leaves them intrigued to learn more, and their lessons are prepared considerably ahead of time to ensure the best possible lessons are taught! Wallace even explained that this was never the case beforehand, as pupils often had never seen  tablets, computers and monitors in the classroom until the programme had begun.

Wallace has frequently demonstrated his dedication to the children of Liberia, living in a particularly remote area yet still prioritising the education of his pupils.

The LEAP programme is helping teachers like Wallace to become the best possible teachers they can be through attending frequent training courses, where they learn essential classroom skills.

Nothing gives Wallace more satisfaction than being able to put these new skills into practice. He has stated that ‘everytime we go to teacher training we learn new things which has helped us greatly to be the teachers we are.’ Wallace’s pupils are undoubtedly grateful to have such a caring and charismatic principal!