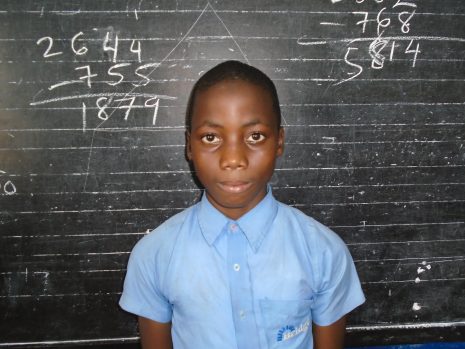 Mohammed is 13-years-old and attends a Bridge Liberia school in Monrovia—the capital city of Liberia. Located on Carey Street, his school is located right in the bustling heart of the city; the loud chatter, honking cars and cries of the street sellers welcome anyone unfamiliar to Monrovia.

Monrovia is on the Atlantic Coast, and with a population of just over one million, is the largest city in Liberia. Twenty-nine percent of Liberians call it home, making it both the political and commercial capital of the country. The economy of Monrovia is dominated by the many government offices and its harbour, which registers 10-15% of the world’s ships.

Mohammed is in the Sixth Grade and was among the first cohort of pupils to take part in the Partnership Schools for Liberia pilot (now called the Liberian Education Advancement Program [LEAP]).

He loves going to school and his favourite subject is maths, he says: “I like being creative with numbers. I love to figure things out and put things together.” Mohammed wants to be a teacher when he grows up, “so I can help others,” he adds.

The oldest child in his family of 11, Mohammed lives with his mother who sells used goods and moves between Monrovia and Grand Cape Mount County about 60 km away. His father lives 130 km east in Buchanan, Grand Bassa County.

When asked what a difference Bridge has made to his life, Mohammed says: “I really like the way Bridge teachers teach, answering my questions. This has inspired me to want to become a Bridge teacher myself when I am older.”