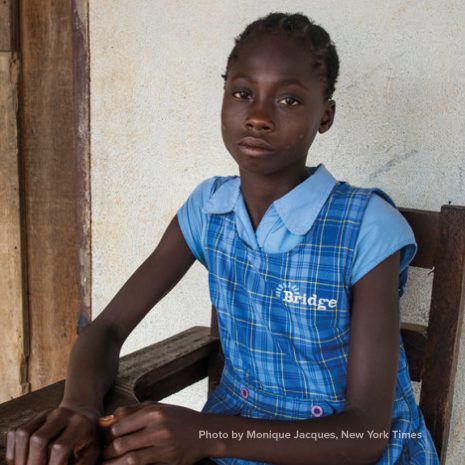 Ruth is nine-years-old and in the third grade with Bridge Liberia. She was featured in a July 2017 New York Times article by award-winning journalist—Nicholas Kristof—which you can read here: A Solution When a Nation’s Schools Fail.

In his article, Nick writes “Ruth told me that the biggest difference since Bridge took over is that the teacher is present.”

Here is more of her story, so typical of pupils in Liberia . . .

When Ruth was younger she was afraid of her teacher, who used a cane to keep discipline and ensure ‘understanding’ in lessons. This fear caused Ruth to skip school and stay at home so that she wouldn’t get hit. She missed out on kindergarten, and the opportunity to spend her early childhood at school.

Her mother, herself a high school dropout, encouraged Ruth to attend a Bridge school after learning that corporal punishment was banned in all of our academies. Ruth says, “my mother said I should go to school because it’s good for girls to go to school, to have a future.”

Ruth is now top of her class, even though she started learning late, she has never looked back. Instead, she looks forward to achieving her dream of “studying science when I get big” to become a nurse.