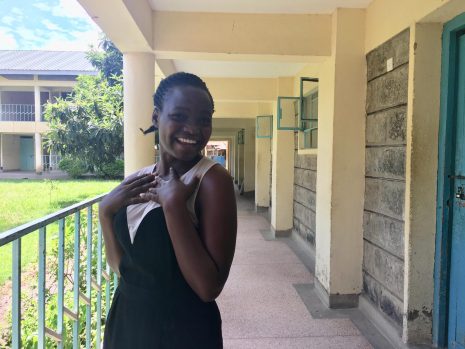 Meet Seline, a charismatic group captain at teacher training that has shown great leadership potential. Along with the majority of trainee teachers, Seline became aware of Bridge through a friend. Her friend had recently been accepted on to Bridge’s teacher training, urging her friend Seline to join her too. Seline still had a year to go before becoming a fully qualified teacher, therefore had to wait a little longer before attending Bridge training.

Other teachers could see the leadership qualities that Seline possessed. Due to this, her fellow trainee teachers selected her to become their team captain during the training sessions.

“All the people in my team started saying my name. I think they thought I was funny. I told them I couldn’t do it because I am too short to be the captain but they kept insisting and insisting until I accepted.”

Whilst reluctant at first Seline became used to the role and thoroughly enjoyed it. “I like the role. I think it suits me. You see, I am funny but I am strict. I have no problem telling them when something is not good.”

A way in which teacher training establishes whether a teacher is a perfect fit for Bridge schools is through finding out whether the teacher is driven by extrinsic (e.g. salary and benefits) or intrinsic motivations (wanting to make a difference in other people). Right from the off, Seline showed that she was fully driven by intrinsic values.

Seline has high hopes for the future. One day, she hopes to be a teacher trainer herself. She really enjoyed her role as a team captain and believes that she can transfer her skills learnt through being a trainee, as a trainer.