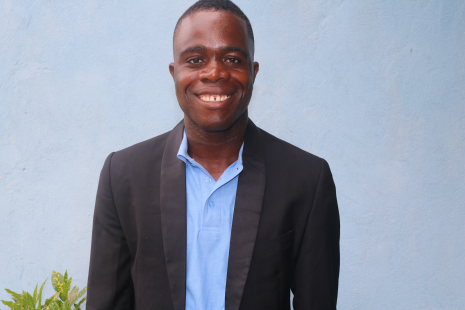 Meet 29-year-old Spencer Gblinwon; he’s been a Bridge Learning & Development Supervisor for two years now. His area is Montserrado, Margibi and Bong Counties, where he supervises eight schools over an area of 120 kilometres! Spencer mostly uses a bike to get to them, especially when he’s visiting rural places—and during the rainy season!

There’s a lot to do in Spencer’s day . . . Firstly, he says: “I monitor lessons and check on teachers and students attendance,” adding, “Then I check smartphones to ensure guides are available and every computer is synced.”

After that, Spencer conducts short and long teacher observations. He follows up with feedback on what went well and what can be improved on. Spencer’s job doesn’t finish in the classroom, however! He also ensures he gets to know the parents in his communities, and discusses with them the progress being made and challenges they face. That’s the way to find solutions.

“Most of the schools I supervise are situated in slum communities,” Spencer explains, “Work can be difficult, but it’s important we all put in a lot of effort in order to help lift all Liberian children!”

He says the kids give him hope with the excitement they show when going to school, and he feels this demonstrates how much education is impacting their lives.

“I would like to tell the world that Bridge is actually helping children whose parents live on less than two dollars a day,” Spencer concludes. “They too deserve quality education like everyone else; Bridge has turned around education greatly.”