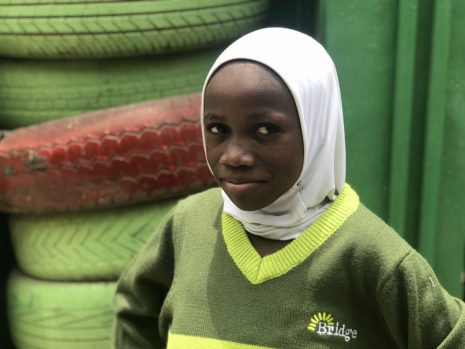 Meet Usnah Badmus, a pupil at Bridge, Saibu Okoya. She lives in a neighbourhood near to her school, and says that the best thing about where she lives is that it’s ‘fun and interesting’. At the weekend Usnah and her friends like to play table tennis.

At nine-years-old, Usnah is one of the younger members of her class, but that doesn’t make her any less determined! She is most focused on the subjects she believes are the most important to her future, and so prioritises maths and english. She also says they are her best subjects, so she wants to do really well in them to raise her exam scores.

What does Usnah want to be in the future? She has held a lifelong ambition of becoming a doctor! “I want to help sick people,” Usnah explains. “Nigeria is a great country—and I want to help the people in it.”