New research shows an increase in the per cent of proud Bridge parents. In the survey, 95% identified as ‘I am proud to be a Bridge parent’, an increase from the previous year. The new research also reveals very strong support for the quality of local Bridge teachers. The poll included hundreds of parents across Kenya who send their child to a Bridge school.

The annual Bridge parent satisfaction survey results follow the Kenyan national exam results which saw Bridge pupils outperform the national average for the fourth consecutive year. In 2018, by an average of 12 points.

The satisfaction survey is designed to understand why parents choose Bridge and how they feel about the educational choice they have made for their children. Parents’ appreciation stems from many factors, but in particular due their belief that their children are getting a life-changing education.

Nearly 85% of parents believe the quality of their child’s education has improved since joining Bridge. About 60% of parents have actively recommended the Bridge network to a friend, with 90% of those citing quality of education as the reason for their recommendation. 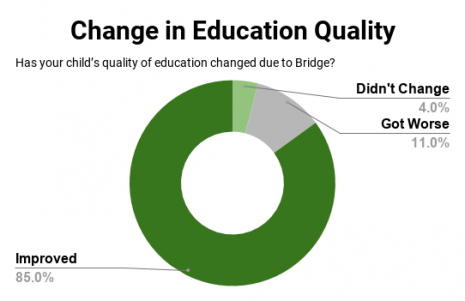 There is clearly a strong relationship between parent satisfaction and a school’s ability to deliver on the promise of improving a child’s education. The survey supports research conducted by the Oxford Review of Education which showed that parents in Kenya broadly believe that low cost affordable schools offer a better quality of education than local public schools.

Other Key findings among Bridge parents include:

A Parent at Bridge Mwakingali said: “I have seen a great difference in my daughter’s education as compared to when she was in a neighbouring school. She has improved in her studies and is destined to do well in her KCPE, just like her brother did in 2017.”

“Bridge has good teachers who are always in school attending each and every lesson”  says a parent from Bridge Kinamba Academy.

Commenting on the parent satisfaction survey results, Reuben Wambugu, Bridge Schools Director in Kenya said: “We’re delighted to once again see such strong support for Bridge schools. Parents are at the heart of Bridge communities. Our ongoing engagement with parents and increased parent participation is one of the reasons why Bridge has such a positive effect on pupils and the communities we serve. We very much appreciate the continued commitment of parents to their children’s education.”

The survey also reveals that parents reported seeing an improvement in both confidence and discipline in their children after starting at Bridge schools. The positive effect on children who study at Bridge is strongly tied to Bridge’s commitment to nurturing skills in children that will help them succeed in life. Parent’s appreciation of Bridge is also built upon these qualities. 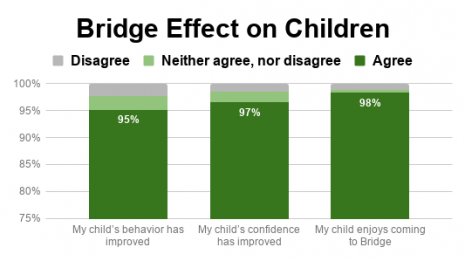 “My child has been in Bridge since Class 1 and her progress has been consistent. I can see that pupils at Bridge are well disciplined and eager to learn,” says a parent from Bridge Majengo Mapya.

A parent from Bridge Misikhu says: “My child has improved in many aspects and loves the school. He can confidently do his homework alone now.”

In Bridge schools, 88% of parents surveyed confirmed they had actively taken part in school life. Increased parent participation in a child’s education is one of the reasons why Bridge has such a positive effect on pupils and the communities it serves.

Bridge parents come from some of the most impoverished communities in Kenya and are often focused on ensuring that their children have an education that will enable them to escape the cycle of poverty. In recent years children from Bridge schools in these communities have been awarded places at elite national secondary schools and even scholarships to prestigious American high schools.

The Bridge Parent satisfaction survey was conducted by Bridge Academies in October 2018. It includes 354 parents with children at 214 of the Bridge schools in Kenya. The survey was based on in depth questionnaires answered by parents via telephone interviews.

The increase in the number of low cost primary schools in Kenya, has been well documented in research articles, here.

Bridge believes every child has the right to high-quality education and works in partnership with governments, communities, parents and teachers to deliver education to over 270,000 children in underserved communities across Africa and Asia.

Globally, there is an education crisis. Around 263 million children and young people are not in school. Bridge is committed to helping tackle this through a data driven, evidence based approach that delivers strong schools and a great education for all.