The impact of parenting on education outcomes

Saturday, 1 June marks the global Day of Parents; an annual event beginning in 2012 following its endorsement by the United Nations General Assembly. The Day of Parents honours parents everywhere for their ‘selfless commitment’ and; the ‘lifelong sacrifice’ that comes with nurturing and raising children. It also recognises the primary responsibility of parents for the health, happiness, safety, education, and wellbeing of their children.

In line with this, we believe that parents are best placed to decide and influence their children’s development and; are strong advocates of the importance of parental choice and engagement especially in terms of education.

What impact does parental involvement have on education outcomes?

The Global Partnership for Education writes: “When parents are involved in their children’s education, children are more engaged with their school work, stay in school longer, and achieve better learning outcomes.”

In addition, it’s argued that parents are role models for their children and have an important role to play in influencing a child’s attitude to education which impacts them for life. Combined with the quality of a school and its teachers, parental involvement forms part of a ‘perfect triangle’ of educational support.

We work closely with parents to build strong ties with individual families—and entire communities— advocating quality education as a means of empowerment and as the gateway to success and opportunity.

How can you measure parental happiness?

We regularly conduct parent satisfaction surveys at our schools. In Uganda and Kenya, 98% and 95% respectively identify as as ‘proud Bridge parents’, a number which is increasing year-on-year. Parents in Uganda reported improvements in their child’s academic performance, happiness, confidence, and said that they believed their child was well cared for at Bridge.

Parental satisfaction is indicative not just of satisfaction with a child’s learning but also of a strong relationship with the teacher and school. We believe that this satisfaction is further enhanced because parents are not only empowered to make educational choices but also feel they are contributing to an education movement in their own communities. 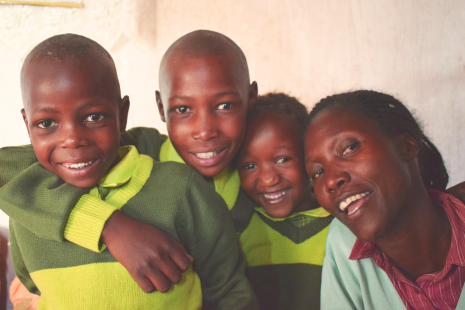 Irene Munere is a single mother from Bridge, Jasho Nyingi in Nakuru county in south-west Kenya. Irene caught polio at the age of four, leaving her disabled. Every morning her 11-year-old son Kevin (second from the left) helps her get to work before travelling to school himself. However, a viral clip of the two captured the hearts of their native Kenya, sparking a local fundraiser which raised the money to buy Irene a wheelchair so she could take herself to work in the morning. A strong role model, she declares: “My disability doesn’t define who I am. I want to be an inspiration to my children.”

Fred Mpanga is a dad who certainly hasn’t taken a back seat in his children’s education. With four sons attending Bridge, Kagoma in the Wakiso District of Uganda, he feels it’s important to lend a hand in the running of their school. He joined the Parent Teacher Association at their academy, and was soon elected as Chairperson; this has given him the opportunity to lend a parent’s perspective to changes being made and spearhead improvements. “As a parent, I feel so proud of my children’s academic progress,” he says, “They can read, write and speak confidently among their peers.” Just as engaging with his own children’s learning will improve their prospects, Fred believes: “Bridge is giving my children a strong foundation for their future.”

One group of very committed Bridge parents in Kenya—the ‘Super Mamas’—have even organised themselves to advocate for changes in attitudes around the education of girls.

They act as powerful role models to both girls and boys and they support each other through the sharing of knowledge, advice and experiences to make valuable contributions to their communities. 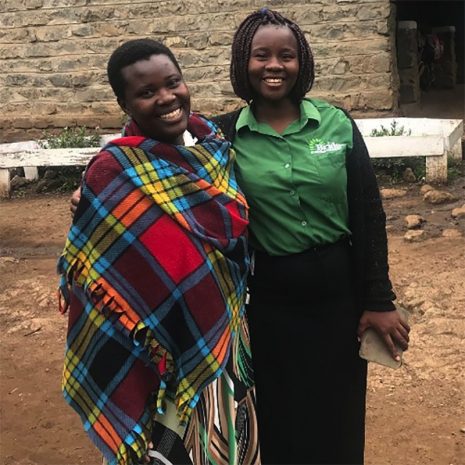 Lilian (left) is one of our founding parents of Bridge Academy, Ongata Rongai. She has four children at Bridge and has celebrated their success since Day One.

Lilian has been thrilled by the positive changes to her children since they started at Bridge, whose progress is recorded in their report books—an important feature of our Bridge-parent relationship. She says, “I especially like their report books which make it so easy to track their performance, and improvements.” In addition to test scores, Bridge report books also record concentration in class, the ability of a child to share with others, attendance and much more. Lilian adds, “It’s just like being in the classroom with them!”

Lilian showed such enthusiasm for her new school that she was invited to become a ‘Super Mama’. She regularly visits the school to talk to girls about menstrual hygiene and provide counselling. As a consequence, she tells us she’s now ‘famous’ around town, with people in her community regularly calling her, “Our mother.” Read more of her story here.

Do parents stay involved with schools when their children graduate? 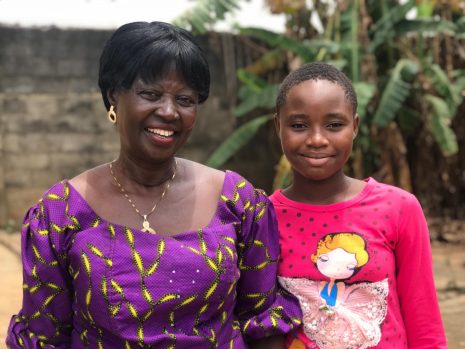 For some parents, they don’t stop being part of the Bridge family when their child leaves. Mrs Ojo from Nigeria still feels fondly about her daughters former Bridge school in Demeke, Lagos. Her daughter Yewande graduated last year and is now excelling at her secondary school. Mrs Ojo is delighted by the “very good foundation” Yewande got at Bridge, marvelling that: “Even Bridge Primary 4 is equivalent to secondary school.” Mrs Ojo continues to support the work done at Bridge by encouraging other parents to send their children there, explaining that the school means “everything” to her.

Thanking parents for their dedication and commitment

Parental engagement and commitment is at the heart of a successful school. This Day of Parents we celebrate the role our parents play in helping children to learn and schools to thrive. We thank them for the dedication and commitment which is enabling educational choice and opportunity at the heart of their communities.

New research published today has revealed that 93% of Bridge parents surveyed in Uganda believe the quality of their child’s [...]

Many factors influence a parent’s decision regarding their child’s education. These range from quality, proximity, perceived prestige and teaching style; [...]

Read Families need a mix of school providers in Africa