Bridge girls score high in PLE, as they outperform the boys

• 95% of pupils pass the national exam

The Ugandan Government has released the 2018 Primary Leaving Exam (PLE) results revealing that, for the second consecutive year, Bridge pupils have outperformed the national average. Bridge pupils are among some of the top performers in the country with 95% of candidates passing the national exam.

Startlingly, the results also reveal that Bridge girls have bucked the national trend, coming out as the country’s top performers. In Uganda, boys outperformed girls nationally, but this was not the case at Bridge schools where equal opportunity and supportive teachers enable girls to surpass their male peers.  Nationally, boys are 9% more likely than girls to be in Division 1 & 2. At Bridge, it’s reversed: girls are 5% more likely than boys to be in Division 1 & 2. Bridge girls performed better than boys, both within Bridge schools and nationally; indicating a far more equal playing field inside Bridge schools where both boys and girls can do well. 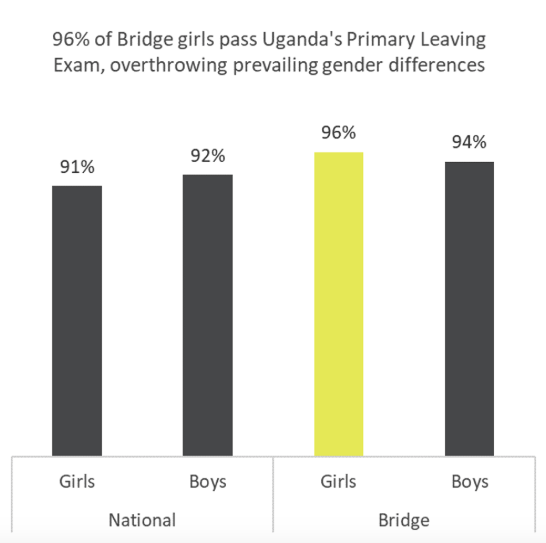 According to the UN, 700,000 primary school aged girls have never attended school in Uganda with 23% of those who do attend school dropping out early due to teenage pregnancy and 35% due to early marriage.

Several districts including Hoima in the western region and Busia in the eastern region all revealed girls to be the best Bridge performers. In Eastern’s Mayuge District, 14-year-old Namusobya Brenda scored an impressive 10 aggregate, placing her in Division One alongside Uganda’s brightest pupils. Her results are even more impressive considering that her district in the eastern region is one of the most impoverished areas of the country.

Speaking about her results, 14 year old Brenda Namusobya from Bridge Magamaga in Mayuge District who is among the top performers in Uganda, scoring 10 aggregates, said: “I am so happy about my results. I studied  hard and I knew that I would make it. I had lots of help from my amazing teachers who never gave up on me. My parents are overjoyed because of my results. I want to be a doctor when I finish school and maybe even build my own hospital one day. Now it’s possible and I would never have achieved this without Bridge in my village.”

Brenda‘s parents who are casual farmers couldn’t help but break down with tears of joy saying: “We are celebrating and dancing because our daughter has passed with such high marks. We had lost hope in educating our girl but, when Bridge came to our community we got hope that one day our girl will be someone important in this country. We are  hopeful that this dream is becoming a reality.”

Fourteen-year-old Nassuna Annet from Kabumbi, Wakiso District who passed in Division 2 and scored 14 aggregates was also overjoyed with her score saying: “I got such good marks thanks to my teachers, they were so kind and always made sure I understood everything. In my district I am lucky most of my friends in other schools had teachers that were not as helpful as mine.”

Other key results include:

Many Bridge pupils are from the impoverished communities in Districts like Mayuge, Arua and Kasese.  Success in their PLE means that Bridge pupils will have access to some of the best Ugandan secondary schools and go on to pursue their dreams.

Bridge’s best performing boy was 13-year-old Mugisha Rogers from Bridge, Kengere in Soroti District who scored 8 aggregates, one of the many Bridge pupils to be placed in Division 1. Talking excitedly about his mark he said: “I really thank God. Now,  I know I can be a doctor. All my teachers were excellent in helping me do so well on my exams. I want to thank them for the support and the belief that I can succeed and get a score in Division One.“

Commenting on the PLE results for Bridge pupils Christine Apiot, Academic Director for Bridge in Uganda, said: “We are so proud of our pupils and especially our girls who have performed exceptionally well in these exams. It proves that girls can perform as well as boys when given the right support and encouragement. The results show the fantastic dedication, passion and hard work that our teachers put into each and every lesson. They consistently deliver a life-changing education for children in some of the most impoverished communities in Uganda.”

Ms Apiot also attributed the success to the ongoing support from the government of Uganda, saying: “We are grateful to the Ministry of Education and Sports for the support and encouragement that they extended to us throughout the academic year. With their passion and enthusiasm towards educating Uganda’s children, in partnership with the private sector, the future of this great nation remains bright.”

“This great performance in the national exams confirms once again that we teach the Ugandan curriculum enabling Bridge pupils to become strong and confident Ugandan citizens.” She added.

“This success is evidence that children from all communities can achieve academic success if given the right opportunities, supportive teachers and empowering schools. These results show Bridge pupils in Uganda are gaining a very high-quality primary education and are able to fulfil their potential.”

Ogaba Bonny, a Bridge Teacher from Magamaga said: “We always believed in our pupils and today I’m so proud of them. From the time they joined Bridge, their academic performance was steadily improving. These results are an encouragement for us to continue to provide evidence based learning. The way we are supported with teaching resources and guides has made all the difference.”

The results are the latest in a string of children’s learning gains being evidenced by Bridge, a social enterprise focused on extending quality education to children across Uganda.

The results released by the Uganda National Examinations Board (UNEB) are a rubber stamp on the consistent and exceptional performance of Bridge pupils. These positive results continue the success of Bridge pupils in the PLE 2017; after which Bridge graduates joined top secondary schools including Nabisunsa Girls School, Tororo Girls School and Busoga College, Mwiri.

Bridge has been operating in Uganda, since 2015.

The Primary Leaving Examinations (PLE) are the compulsory national exams that all Ugandan pupils take at the end of Primary Seven. Independently administered by the Uganda National Examinations Board, PLE is a high stakes standardised exam that sifts children for secondary schools. The mark is entirely based on exam performance and does not comprise any teacher assessments or coursework. Those who achieve high grades are better placed to be able to access secondary level education in Uganda.

The PLE Exam took place in November 2018. The results were released on the 17 January 2019 by the Minister for Education.

This is the second year that Bridge pupils have sat the National Government’s PLE. In the 2017 PLE exams, Bridge Uganda pupils outperformed their peers. More information on the 2017 results can be found here

Bridge believes every child has the right to high-quality education and works in partnership with governments, communities, parents and teachers to ensure access to quality education. Bridge has served more than 500,000 children to date, across over 1,000 schools.

Bridge leverages in-depth teacher training and support, advanced lesson plans and wireless technology to provide pupils with a meaningful and life-changing education. Globally, there is an education crisis. Around 600 million children are either not in school at all, or in school and not learning. Bridge is committed to helping tackle this through a data driven, evidence based approach that delivers strong schools and a great education for all.

Read more about our Learning gains in Uganda

Learn more about our work in Uganda