New research published today has revealed that 93% of Bridge parents surveyed in Uganda believe the quality of their child’s education has improved since joining Bridge. While, 92% believe their child’s behaviour had improved.

The encouraging findings in the annual Parent Satisfaction Survey follow the release of the 2018 Primary Leaving Exam (PLE) results where 95% of Bridge pupils passed their exam — outperforming the nationwide average for the second consecutive year. Of those who have recommended Bridge to a friend, 97% cited the quality of education as their motivation. 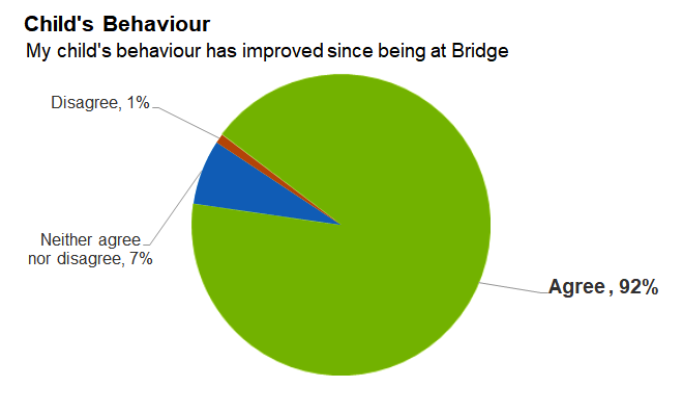 For the second consecutive year, parents have revealed that they are overwhelmingly ‘proud’ to be Bridge parents with those identifying as such increasing from 95% in 2017 to 98% in 2018.

The annual survey is designed to understand why parents choose Bridge and how they feel about the educational choice they have made for their children. Parents’ appreciation stems from many factors, but in particular due to their belief that their children are getting a life-changing education and that they are happy at school.

Parents in Uganda overwhelmingly believe that Bridge is providing a positive learning environment for its pupils, with 97% saying that their children enjoy going to school and 96% believing that their child is well cared for at Bridge.

A Bridge, Kagoma parent says: “I have seen improvement in my child, every day he comes home and tells me what he learned at school.”

Another parent at Bridge, Abayita Ababiri says: “Since she joined, my daughter has improved in reading, English, and has become much more respectful.”

The survey indicates a strong relationship between parent and teacher at Bridge schools, showing that 91% of those surveyed reported they were happy with their child’s teacher and almost 96% of parents feel Bridge is effective in communicating their child’s progress. This bond between teacher and parent is further emphasised by an active parent participation, with 97% of parents surveyed reporting that they have engaged in school meetings. Increased parent participation in their child’s education is one of the reasons why Bridge has such a positive effect on pupils and the communities it serves.

Hamza Tamugende, a teacher at Bridge School Nabaziza, said: “These results show that our hard work is paying off and that parents are appreciative. As a teacher, I’m encouraged that our pupils are not just coming to school but they are learning, and getting better each day not only in their academics but also in their confidence and self esteem.”

Bridge Schools Uganda Academic Director, Christine Apiot said: “The ultimate measure of any school’s success is the happiness and success of its pupils and at Bridge, we can see that parents are thrilled with the effect Bridge is having on their children, both inside and outside of the classroom. We are grateful to every Bridge teacher and parent for making our communities so conducive for learning.”

The 2018 Parent Satisfaction Survey was conducted in December 2018 and included 365 parents across different communities in Uganda. The survey was based on in depth questionnaires answered by parents using telephone interviews.

For two consecutive years, Bridge Uganda pupils have outperformed their peers nationally in the Primary Leaving Exam (PLE).  In 2018, 95% of the pupils passed the exam while in 2017, nearly 93% of the pupils achieved top scores, placing them in Division 1 and Division 2. Read more, here

Bridge believes every child has the right to high quality education and works in partnership with governments, communities, parents and teachers to ensure access to quality education. Bridge has served more than 500,000 children to date and runs or supports over a 1000 schools

Bridge leverages in-depth teacher training and support, advanced lesson plans and wireless technology to provide pupils with a meaningful and life-changing education. Globally, there is an education crisis. Around 600 million children are either not in school at all, or in school and not learning. Bridge is committed to helping tackle this through a data driven, evidence based approach that delivers strong schools and a great education for all.