Bridge Kenya pupils have just sat their primary school leavers’ exam for the third consecutive year and surpassed their Kenyan peers. The results confirm the trend set in 2015 and 2016 with children significantly outperforming the national average.

The Kenyan Certificate for Primary Education (KCPE) is the national primary exit exam and the results determine whether children have the opportunity to continue with their education. In the 2017 exam, Bridge pupils exceeded their peers nationwide by over 10 percentage points with thousands scoring at or above the 250 marks designated as a pass by the Kenyan Government. This outperformance is even more impressive since the nationwide average includes pupils attending elite private schools as well as those in government schools.

An incredible 86% of Bridge pupils scored over the 200 marks making them potentially eligible for a secondary school. This compares to just 76% nationwide. Bridge pupils taking the exam came from across 44 of the 47 counties in Kenya where access to education is often challenging. 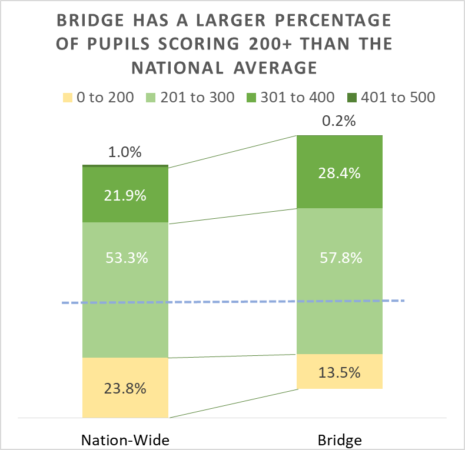 The data reveals a strong performance for Bridge pupils at both ends of the scoring distribution. At the top of the distribution, Bridge pupils were over 25% more likely to score above 300 marks than their peers across Kenya.

These strong academic results add weight to the ever growing body of external evidence that highlights Bridge’s effectiveness in helping children from marginalised communities to excel in learning. This new evidence from Kenya is compounded by earlier learning gains at Bridge Partnerships Schools for Liberia (PSL) which showed pupils learning at twice the speed of their non-PSL peers.

The results continue to emphasise the effectiveness of the Bridge model of teaching as the longer a child studies at Bridge the better they perform.  In 2017, those who had attended Bridge for five years or more scored an average 280 marks and had a pass rate of 69%. 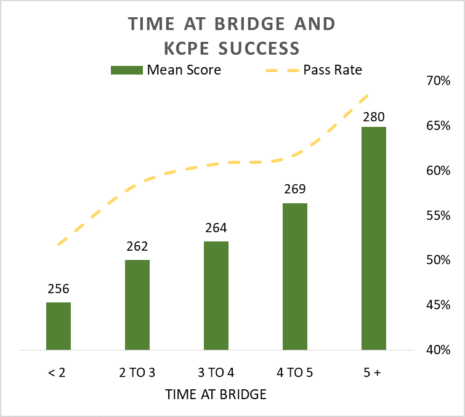 In a country where girls access to education is traditionally low, the Government has focussed on redressing the balance. Since 2015, the number of Bridge girls passing their KCPE has increased by over 20% and in 2017 girls who had attended a Bridge school for over five years were our highest performing cohort, averaging 287 marks. Further proof of our commitment to empowering girls.

Sean Geraghty, Chief Academic Officer at Bridge, said: “Bridge now has three consecutive years of above average learning gains for Kenya, and very strong learning gains in Liberia. We are delighted that the evidence base for Bridge’s learning gains is becoming stronger and stronger every year.”

He praised the class of 2017 for their effort in achieving such high scores, saying “It is a testament to their dedication and hard work and once again shows that Bridge is delivering life changing education for children in some of the most challenging environments.”

Sean also praised Bridge teachers, saying: “These results can only be achieved in schools with strong, high quality, well supported teachers. This is a massive boost for all our dedicated teachers in Kenya who have demonstrated their brilliance and effectiveness in creating a rich learning environment.”

Nowhere is this more apparent than the 11 Bridge pupils who scored over 400 marks in the KCPE, placing them in the top 1% of pupils nationwide. These results illustrate how Bridge schools provide an outstanding education in some of the most disadvantaged communities in Kenya — from the slums of Nairobi and remote rural communities, to areas affected by the terrorist group al-Shabaab, where some government schools have been closed.

The future looks bright for this years KCPE candidates. “I’m really excited about the future and feel I have so many opportunities that I would never have had if I hadn’t been lucky enough to go to Bridge,” says 13-year-old Vanessa Musyoki from Bridge Kwa-Holla Mombasa, who scored an amazing 408 marks on her KCPE. “Now, I can be a role model for other girls in my community. I will keep working hard and one day be a writer and produce books like the ones I have learnt to love at school.”

Fourteen-year-old Joseph Barak from Bridge Koru in Kisumu County scored an incredible 413 marks on his KCPE. He says “My amazing teachers really motivated me to aim high. My school encouraged me to believe that I could fulfil my dreams. I used to say that I wanted to be a lawyer; now I think I will actually be one.”

Bridge students averaged 265 marks in the KCPE examination, 15 marks higher than the national average. These results add to the mounting body of evidence that the Bridge model delivers strong learning gains for its pupils.