Today, only 28% of scientific researchers are women and only 3% of Scientific Nobel Prizes have been awarded to women.

In recognition of the fourth annual International Day of Women & Girls in Science, we’re celebrating female scientists from Sub-Saharan Africa. These incredible women have defied poverty, stereotypes and much more to excel in their chosen field; they’re advancing knowledge and women’s rights in Africa and around the world.

Dr Wangari Muta Maathai (died 2011) was a female Kenyan scientist, environmentalist and political activist best known for establishing the ‘Green Belt Movement’ which focused on planting trees and women’s rights. A response to deforestation, which was impacting on the ability of the rural poor to continue subsistence farming, the Green Belt Movement spread across Africa and has been responsible for the planting of 30 million trees. In 2004, she became the first African woman to receive the Nobel Peace Prize for “her contribution to sustainable development, democracy and peace.” Maathai was also the first female scholar from East and Central Africa to take a biology doctorate, and the first female professor in her home country of Kenya.

Professor Francisca Nneka Okeke is a Nigerian scientist and Physics Professor at the University of Nigeria — the first female Head of Department at the University. In 2013 Okeke was awarded the L’Oréal-UNESCO For Women in Science Awards Laureate for Africa; in recognition of her contribution to scientific progress. In 2011, she was elected a fellow of the Nigerian Academy of Science, which at present has just 10% female membership.

Luise Nghiueuelekwa was born in Likuku in northern Namibia. Her aunt saw academic potential in her, so she moved her to the capital, Windhoek, in search of a better education. Today, she’s pursuing a Bachelor of Medicine and Bachelor of Surgery program (MBChB) at Kampala International University, Uganda. Well on her way to becoming a doctor, she says: “There has always been a shortage of doctors from Namibia. The majority of our doctors are foreign who do not speak our local languages. This creates a barrier between patient and doctor interaction. I intend to break this barrier.”

Bih Janet Shufor Fofang has been teaching electrical engineering for over 15 years at the College D’enseignement Technique Industriel et Commercial; the largest government technical institute in Cameroon. In 2016, she was awarded the A. Richard Newton Educator ABIE Award, which recognises educators who have developed innovative teaching practices and approaches that attract girls and women to science, technology, engineering and maths (STEM) subjects. When asked what her first impression of STEM was, Fofang replied: “I have never thought of STEM as something that had a gender assigned connotation tagged to it.”

Dr Margaret Mungherera (died 2017) was born in Jinja, Uganda. She served as the President of the Ugandan Medical Association, and was re-elected five times to this position. In 2013, Mungherera was elected the first female President of the World Medical Association. She held an Honorary Doctor of Philosophy from Kampala International University in recognition of her historical achievements.

Dr Segenet Kelemu is an Ethiopian scientist and the current — and first female — Director General of the International Centre of Insect Physiology and Ecology, based in Nairobi, Kenya. She was a recipient of a 2014 L’Oréal-UNESCO Laureate for Women in Science Awards. Dr. Kelemu was also listed among the 10 most influential African women in agriculture by the Journal of Gender, Agriculture and Food Security. In January 2018, she was recognised by Bill Gates as one of five ‘Heroes in the Field’ and profiled in TIME magazine, which writes that, “Kelemu grew up in a small Ethiopian village with only one dress and no shoes to wear. She rebelled against the constraints placed on her as a girl.” 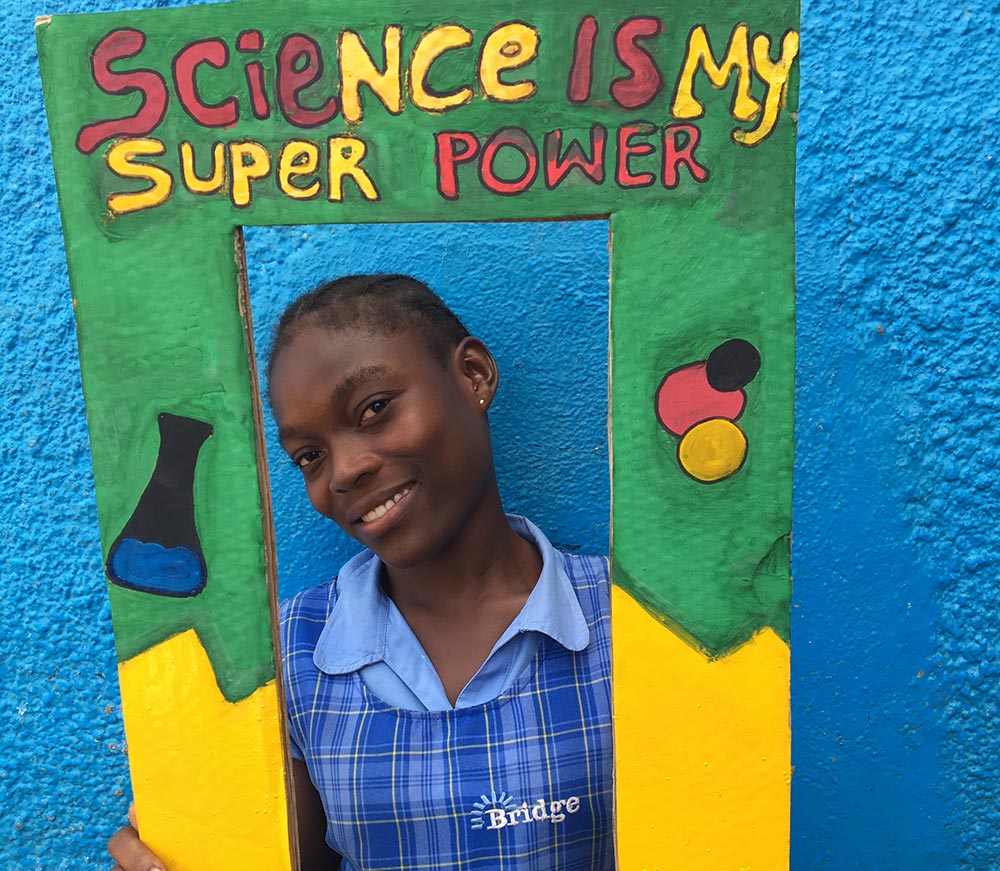 Looking to the future, Sophie Dennis is a Bridge Liberia pupil who goes to school in Harper, Maryland County in south-east Liberia. Both her parents work for a local church and her siblings all go to school too, but only she goes to a Bridge supported government school. She says, “I’m learning more than my brothers and sisters. They don’t learn computers like I do.” She adds: “My mother motivates me to study hard. She’ll only let me watch TV on Friday and Saturday and, we study from Sunday to Thursday.” Sophie’s favourite subject is science, she likes learning about the human body because she wants to be a nurse when she’s older. Sophie smiles, and says, “I tell my friends who are not in school… you must go to school! You must study science, to be healthy!”

At present, the World Academy of Sciences, which advocates for ‘the advancement of science in developing countries’ has just 165 female fellows to 1,094 males — a 13% female representation.

Here’s hoping that there will be many more African female scientists both created and recognised in the near future.

At Bridge, we’re breaking barriers daily too. We’re getting girls in to school, our classrooms have gender parity and, we have created and use gender sensitive instruction to encourage traditionally ‘male’ aspirations amongst our girl pupils, such as jobs in science and politics. Read more about our work to empower girls here.

We encourage you to take a look at the L’oreal-UNESCO For Women in Science Awards, which began in 1998. An annual event, the Awards recognise five eminent female scientist from the five regions of the world (including ‘African and Arab States’). The next awards will take place on March 14, 2019 in Paris, France.

The website Levers In Heels is also a good resource on African women in STEM.

The United Nations Educational, Scientific and Cultural Organization (UNESCO) Institute for Statistics (UIS) regularly measures and reports on the progress [...]

The annual Careers in Africa Employer of Choice Study aims to shape the conversation about what makes a great employer [...]