Celebrating education’s role as the foundation of the SDGs

It’s been a long time coming, but finally there is an an International day of Education; thanks to our Nigerian partners.

If you’re reading this, you already know that a good education is the foundation of so much more, on so many levels. As we celebrate the first annual International Day of Education — which follows the adoption of Resolution 73/25 at the UN General Assembly in December 2018 — we’re exploring how SDG4: Quality Education, is the foundation for sustainable development, and therefore of the Sustainable Development Goals.

Adopted in 2015 by the UN, the Sustainable Development Goals (SDGs) are a “blueprint to achieve a better and more sustainable future for all.” Together, there are 17 goals which embrace the full spectrum and complexity of our ‘global challenges’ with a view to eradicating each challenge by 2030. 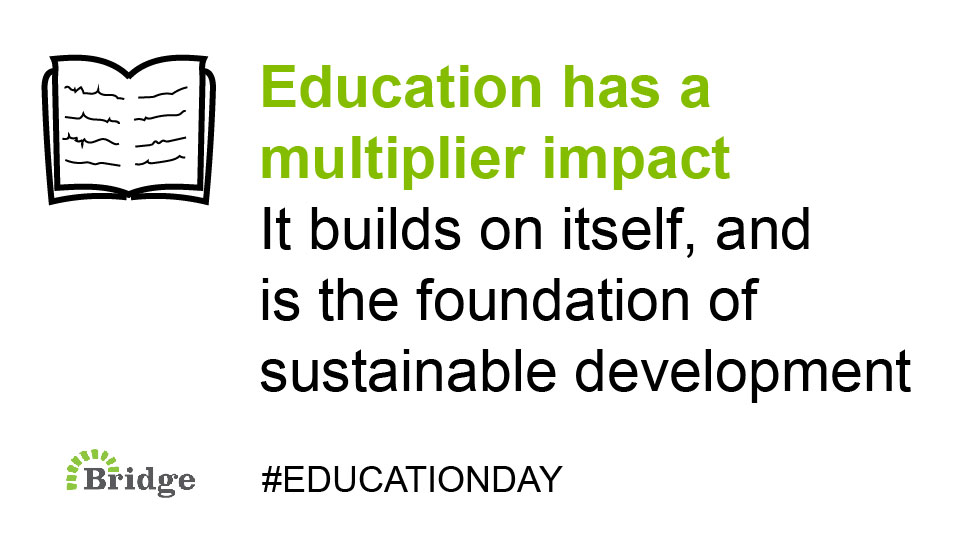 Goal 4: Quality Education, is also the foundation of improving people’s lives. With hundreds of millions currently out-of-school or in school but not learning, it’s our belief that SDG4 should be the priority for the global development community — as it impacts on at least six other SDGs, these being:

The above list is testament to the multiplier effect of a quality education. Let’s explore each in turn:

According to UNESCO, 171 million people could be lifted out of poverty – a 12% drop in global poverty – if all students in low-income countries left school with basic reading skills.

At Bridge, we’re particularly proud to be operating in some of the world’s most marginalised communities where access to quality education can be difficult or too expensive for many. Discover the story of Naomi from the Mukuru Kwa Njenga slum in Nairobi, Kenya: “I was a girl who had no future until I learned to read.”

When mothers in particular are educated, even at the most primary level, they are more likely to be well informed about various diseases and take steps to prevent them. UNESCO reports that each extra year of a mother’s schooling reduces the probability of infant mortality by as much as 10% and that a child whose mother can read is 50% more likely to live past age five. A study in the journal Lancet also showed that four million child deaths have been prevented over the past four decades thanks to the global increase in women’s education.

One additional school year can increase a woman’s earnings by up to 20%, according to World Bank studies, and Plan International has shown that some countries lose more than $1 billion a year by failing to educate girls at the same level as boys. We also know that as the gap between the number of girls and boys narrows, so too, do gender disparities in wages and employment.

See how Bridge is working to tackle gender equality through education.

The Education for All Global Monitoring Report showed that, in 1965, adults in East Asia and the Pacific had, on average, spent 2.7 more years in school than those in sub-Saharan Africa. Over a 45-year period, average annual growth in income per capita was 3.4% in East Asia and the Pacific, but 0.8% in sub-Saharan Africa. The difference in education levels explains about half of the difference in growth.

One study showed that a 0.1% improvement in a country’s education equality can, over forty years, raise its per capita income by 23% higher.

And, with better education, people from traditionally disadvantaged communities are better positioned to advocate for their own rights and needs, gain entry into higher echelons of economic, social and civic life and help narrow gaps of inequality across their societies.

Learn more about Bridge’s work to provide education in areas of conflict; we’re currently active in Kenya, Nigeria, Liberia and Uganda; and, recently ran a pilot to deliver education to Syrian refugee children living in Lebanon.

Studies have shown that people with secondary educations are more likely than those with only primary education to show tolerance for people who speak another language (a 21% difference in Latin America and 34% among Arab States), immigrants (26% and 16%, respectively), homosexuals (32 and 1%), people of a different religion (39% and 14%), people with HIV (45% and 12%) and people of a different race (47% and 28%). Typically, in order to even begin a secondary education, pupils will need to complete a primary education and get good grades. Read more about our learning gains and exam results here.

We also know that literate people are more likely to participate in the democratic process and exercise their civil rights, and that, if the enrolment rate for secondary schooling is 10 percentage points higher than the average, the risk of war is reduced by about three percentage points.

Therefore on this, the first International Day of Education we call on all those concerned to recognise and commit to making access to quality education an immediate priority. The time has passed for slow studies and incremental gains. We need quick, scaleable action. Education is the best investment you can make, and the surest path to sustainable development.

Educating girls has a multiplier effect both locally and nationally

Read more about our Impact