Progress is Possible… when you scale what’s working

Bill & Melinda Gates started their Goalkeepers initiative in 2017, to keep world leaders faithful to the Sustainable Development Goals and hold them accountable for their progress – or lack thereof. Bridge is proud to be a Goalkeeper, and a partner in the progress of the SDGs.

Now in its second year, the annual Goalkeepers event is timed to coincide with the United Nations General Assembly, and the publication of a Goalkeepers report to guide the conversation around the progress of the SDGs.

What we’ve learned this year is that progress is in danger of stalling – but, hope is far from lost – the theme for 2018 is #ProgressIsPossible and the discussion, especially with regards to education, has been focused on what’s working, why and how to scale up the right solutions.

Goalkeepers reflects the shift in focus away from accessing education to measuring outcomes whilst acknowledging the complexity of ensuring that learning is occuring. The report outlines how in many areas of the world, a growing population combined with poor education outcomes represents a social, political and economic time bomb. This issue is particularly acute in Africa, where the youth population is booming and progress towards SDG4: Quality education for all, has been the slowest.

Looking at the progress made to date, we learn that ‘the first part of the equation’ — getting children in to school — is for the most part, complete. Yet, a note of caution is sounded regarding the second part of this equation: “Unfortunately, the pathway for improving school outcomes is not as clear-cut as the strategy for improving school access.”

Further, Ashish Dhawan, Chairman of the Central Square Foundation notes: “The benefits of education accrue not when students enter the classroom but when they leave it having learned basic skills.” To illustrate this issue, it calls on UWEZO data from Kenya which shows only half of all Grade 3 pupils understand that 20 + 2 = 22.

The report highlights examples of individual innovations that are working for students in India. For example, Teaching at the Right Level, a pedagogical method pioneered by the Pratham Education Foundation, which groups pupils by what they know rather than by age or grade; a method that has consistently improved students’ performance on tests.

Another innovation that has had an impact is Mindspark, an adaptive learning tool that helps teachers to personalise instruction through an online environment. In a study, students who spent 20 weeks using Mindspark scored 200 percent higher in math than students in a control group.

However, Goalkeepers argues that achieving system-wide improvements in learning is much harder with: “precious few examples of success at scale in low- and lower-middle income countries.” Those that have demonstrated success, such as Bridge, need to be cultivated.

Importantly for low and middle-income countries, it is understood that simply spending more money on education does not automatically lead to better learning outcomes. Using the example of Vietnam, Goalkeepers illustrates how poorer countries can compete with — even outperform — richer countries like the United Kingdom and the United States.

Viet Nam has been able to compete with the USA, a country whose average GDP per capita is 27 higher than Vietnam! As you can see in the below graph, when test scores are plotted against GDP, Vietnam is an extreme outlier in math, reading, and science. 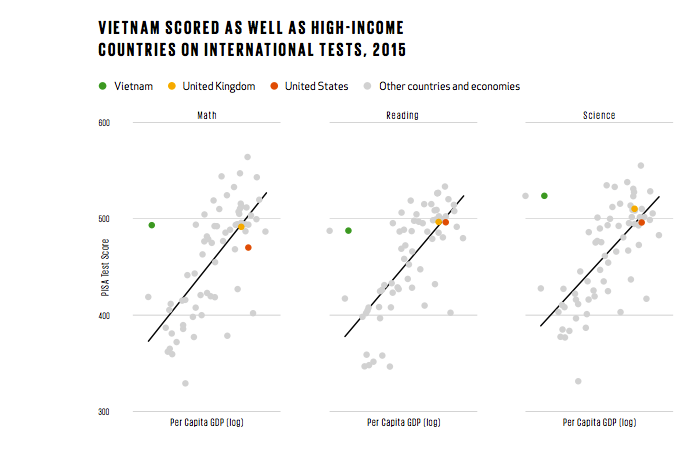 Through the Goalkeepers Vietnam example, we learn the four key traits of a successful education ecosystem, which are:

1. A focus on core maths and reading competencies at primary school

2. Teachers that are held accountable for learning

3. Any child, no matter how poor has the right to a quality education and deserves equal chance to succeed

Finally, and most importantly:

4. Schools must analyse data routinely to track progress and adapt where necessary

If these four key traits of a successful education ecosystem sound familiar, it’s because they are what Bridge has been preaching since inception. It is only by focusing on getting the basics right, empowering and supporting teachers, expanding access to quality education and routinely measuring and iterating a pedagogical approach that you can succeed.

If successful models like Bridge’s are scaled further, they will make a substantial contribution to the prosperous future of countries and continents and the many millions of individuals who are currently not in school, or in school and not learning.

We hope policymakers at UN General Assembly (UNGA) will take notice and support what works. In a world saturated by technological change, education is overdue what the World Economic Forum calls, a “moonshot moment.” The international community needs now to support investment into innovations that go further and faster, rather than simply an ambition to get every child into school, which enjoys universal support but risks delivering very little change.

Africa Is A Continent Where Education Reform Is Working