For the fifth consecutive year, pupils at Bridge International Academies (Bridge) have excelled in the Kenya Certificate of Primary Education (KCPE) exams, exceeding the national average—which includes elite private schools—by 16 marks; the equivalent of 0.25 standard deviations and an extra year of learning. 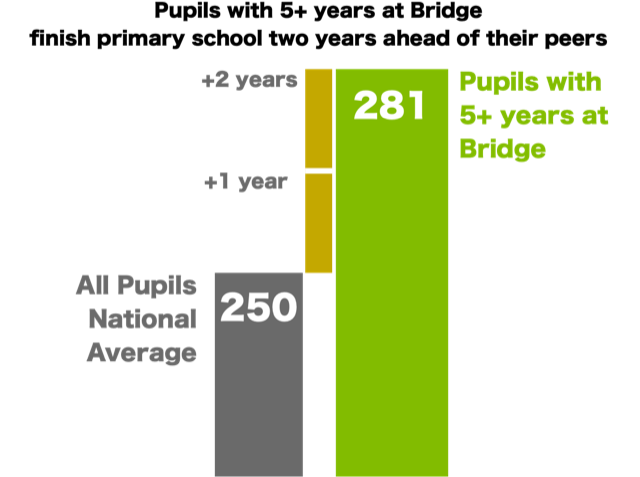 The results show a clear correlation between years of attendance at Bridge and academic excellence. The longer pupils are at a Bridge school, the better they perform. Those attending Bridge five years or more achieved an average mark of 281 compared to a historical national average of 250.

Impressively, analysis of the results reveal that Bridge schools have eliminated the boy/girl achievement gap in their schools with a one point differential. The number of Bridge girls scoring over 250 marks (traditionally, a ‘pass’) in their KCPE has increased by over 22% in the last five years.

The highest performing Bridge pupil was Laura Atieno from Bridge Ndori in Siaya County who scored 417 marks. Magdalene Chelagat from Bridge Likoni in Mombasa County and Bonventure Kong’ani from Bridge Mjini in Bungoma County came close behind with scores of 412 and 408 respectively. They have proven that socio economic background does not affect a child’s ability to learn and perform well; with the right support, children from low income and underserved communities can compete and excel with those from more privileged backgrounds.

Thirteen-year-old Laura Atieno from Bridge Ndori in Siaya County achieved 417 marks and dreams of becoming a neurosurgeon. She said: “I’m very happy to have achieved such an amazing mark, its life-changing and I’m so proud to be not only the best girl but the best pupil. My school and my teachers made me believe that I can achieve my dreams if I study hard and now I can see that it is true. I know this is just the beginning and I can go on and perform well in secondary school too which will help my family and my community have better lives if I study hard.”

Reuben Wambugu, Bridge International Academies’ Schools Director in Kenya said: “Thousands of children from underserved communities have proven once again that where you are from doesn’t have any impact on what you can achieve. For the fifth year in a row our pupils have outperformed their Kenyan peers showing that our approach to teaching and learning works. This is most easily seen in the fact that children who have attended a Bridge school for five or more years get 31 more marks on average—the same as two additional years of schooling for an average child.

“We’re really proud of what has been achieved and praise must go to our teachers and pupils who have worked so hard.”

Bridge graduates have gone to some of the best secondary schools across the country including Pangani Girls, Maranda High, Friends Kamusinga and Mangu High. Previous Bridge graduates have also won prestigious scholarships to US high schools including St Andrews, Florida and Episcopal High School and St. Anne’s-Belfield, Virginia.

Across Africa, Bridge runs or supports over 1,500 schools. The KCPE results are the latest in a string of learning gains being independently evidenced by the social enterprise.

Bridge is  a social enterprise, founded in Kenya, that leverages teacher training, coaching and technology to enable life-changing education in underserved areas.

The Kenyan end of  primary school exams, or Kenya Certificate of Primary Education (KCPE) are the compulsory national exams that all Kenyan pupils take at the end of Grade 8. Independently administered by the Kenyan government, the KCPE is a high stakes standardised exam. The mark is entirely based on exam performance and does not comprise of teacher assessments or coursework.

All pupils are eligible for secondary school, but the mark determines what type of secondary school. Historically the ‘pass mark’ for the KCPE was 250 out of a possible 500 marks. The national average remains 250 marks.

Bridge is a proud partner to the government in the roll out of the Competency based Curriculum which moves to Grade 4 next year. For the upper primary, Bridge is proud to teach the 8-4-4 Kenyan curriculum and there’s no greater testimony to this than the good KCPE results it continues to register every year.

Bridge believes every child has the right to high quality education and works in partnership with governments, communities, parents and teachers to run or support over one thousand five hundred schools. The social enterprise has empowered nearly 750,000 children with a life changing education in underserved communities across Africa and Asia.

Globally, there is an education crisis. Around 263 million children and young people are not in school while around 600 million in school are not learning. Bridge is committed to helping tackle this through a data driven, evidence based approach that delivers strong schools and a great education for all.