With an estimated three billion people and growing connected to the internet, learning to code – otherwise known as the learning the language of computer programmes, applications and websites – is in demand and becoming essential to those who want to successfully navigate the world of tomorrow.

And yet, despite Ada Lovelace – creator of the world’s first code – being female, approximately 90 percent of coders today are male. As the world goes more digital, we need to make sure that both girls and women are represented equally. This is a problem that was expressed recently by the British IT pioneer Dame Stephanie Shirley who argued for teaching code to girls (and boys) as young as two-years-old to “ignite a passion for puzzles and problem-solving.”

UNESCO has said that girls’ underrepresentation in science, technology, engineering and mathematics (STEM) education is deep-rooted and puts a detrimental brake on progress towards the achievement of the sustainable development goals.

Providing an environment that nurtures girls and gives them the confidence to experiment with subjects that may have been outside their immediate environment is part of the battle. Cracking the Code found parents with lower socio-economic status and education had less positive attitudes to STEM.

We are even more passionate about understanding and using the benefits of technology at Bridge. Our classrooms are greatly enhanced through the use of our technology, enabling us to improve learning each and every day by acting on the data we collect. We believe that our girls should be given the same access to technology.

So, we embarked on a partnership with Lagos State as part of CodeLagos which has the laudable aspiration of teaching one million Lagosians to code.

Back in February 2017, Abocoders invited Bridge Nigeria girls to attend their Django Girls event, which was a free programming workshop for girls to learn how to code their own website in a single day.

After the event, they would begin an eight-week ‘crash-course’ in coding with PyLadies, an international group whose aim is to get more women and girls engaged in the programming language of Python. The course would conclude with a speaker slot at the inaugural PyCon Annual Conference (Pycon) in Lagos, Nigeria.

Fast-forward to September 2017 and girls from Bridge Academies in Maya, Demeke, Ajangbadi, Orimedu and Ijegun attended PyCon; the largest annual gathering of the Python community in Nigeria. 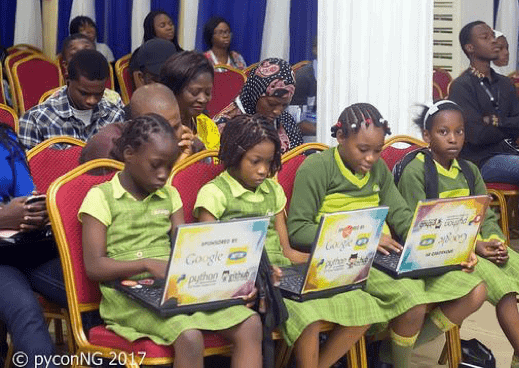 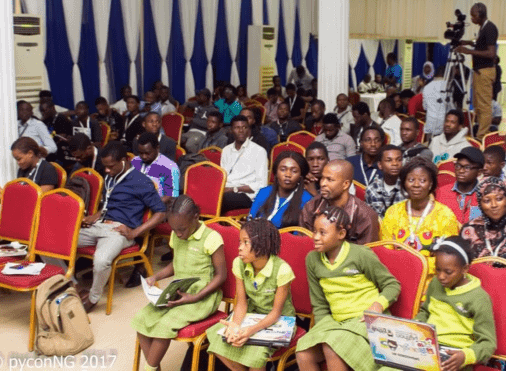 Programmer Adewole Samuel says “One of my best moments, was when ten-year-old [Bridge pupil] Sophia Irozuru gave a talk on her experience of learning Python so far,” adding “alongside some of her classmates, she is part of the python girls group. Her talk was met with a loud applause by attendees at the conference.”

Sophia kept the audience entertained presenting “Imagine a world without computers?” where she described her experience of learning to draw shapes and play games. Not only has coding given her a love of STEM but it has given her the confidence to stand on a stage and address a wide-ranging audience.

Many Bridge pupils live in impoverished areas where the ability to go to school (and use a computer) is something that should not be taken for granted. Learning to code and developing the confidence to take their place – not just in Nigeria but in the global economy – is broadening the horizons of our female pupils and uncovering a whole new world of possibilities.

All of the girls who attended PyCon have since expressed an interest in pursuing careers in computer science and software engineering.

Bridge is proud of its emphasis on co-curricular activities and gender parity in its classrooms; read more about how we are empowering women and building confident, successful girls.

“I will be with my child till the end of #PyConNG2017, having seen the importance of python for my girl” – Father of @Bridge_Nigeria pupil pic.twitter.com/wkIrl8LxSA

Find out more about our co-curricular activities below:

Pressing for Progress through Gender-sensitive teaching; What it means to do it the Bridge way